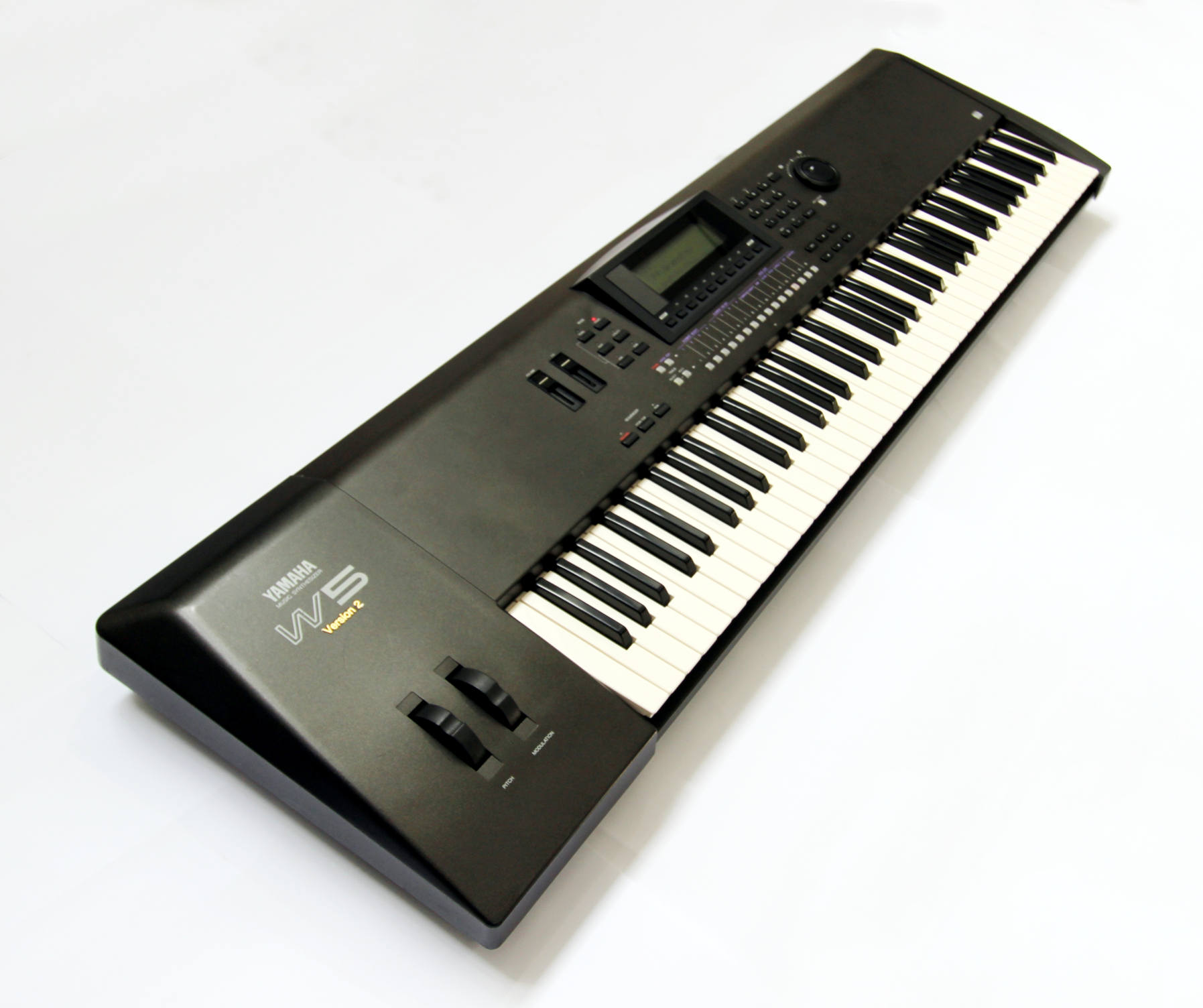 The Yamaha W5 is a workstation and successor to the highly successful SY series. We believe that “W” was meant to represent “Workstation”. It was released in 1994 together with the W7 which is almost identical except that it has one less octave. This was the first time Yamaha released two variations of the same machine to give customers a choice between 61 and 76 keys [Todays models are normally released with 61, 76, and 88 Key variations].

They were not popular because they did not offer much more than their predecessors. With no major technological advancement or design developments, musicians mostly hung on to their SY synths or turn to other manufacturers like Roland and KORG. With poor sales they are today relatively rare though not highly desirable. When they do turn up second hand, they can be a bit bruised and probably only worth between $100 and $300. We would expect to pay $500+ for a mint example that comes complete with accessories such as original case, manuals, pedals and sound cartridges. There was a Version 2 upgrade which was distinguished only by a golden sticker that said “Version 2”.

Unlike the previous DX and SY ranges where Yamaha profited over many smaller models, there were no other spin offs designated with a “W”.  There was the QS300 released shortly afterwards, which looked to be similar in design.

From at least one Japanese Yamaha catalogue from 1995, it appears that both the SY99 and SY85 synths were still selling at the same time as the W5/W7 models, with the SY99 at almost double the price of the W5.

While the W5 workstation has often been described as heavy, it is in fact a whole kilo lighter than the SY99. At 1288mm in length it is the longest of all Yamahas 76 key synthesizers. Unlike most other Yamaha synthesizer ranges the W series had no rack module equivalent which is further testimony to its lack of popularity.

We reviewed the W7s big brother (the W5) two years earlier and many of our views remain the same today as they did back then. The W synths look rather basic and were not a big leap forward from the previous models. The screen remained the same, and at a time when KORG produced significantly larger screens, Yamaha’s screens across all their product range at that time were inadequate by comparison.

At first it appears to be a similar colour to the SY series, but on closer inspection there is a slight metallic silver in the black. This slight colour change is important as Yamaha has a tradition of introducing a new colour with each new generation of Synthesizer. The end panels have evolved from previous models to be simpler with a rounded off wedge shape. Upon closer inspection we came to appreciate the subtle beauty of this shape. It’s simple, gentle and nice to touch. The screen is one feature that stands out. While it’s the same size as the previous SY77 & SY99 models it is housed in a frame that angles it up from the main panel for easy reading. It looks almost as if it were meant to be adjustable but unfortunately is fixed. The other distinguishing characteristic of the W synths are the 16 small white translucent buttons under the screen. While they look like cute little sweets, they are a bit small and don’t feel nice to press. They are also spaced a bit close together and we noticed that they often require servicing.

With so much space on the front panel it seems odd that the designers did not spread things out more or use larger buttons. Perhaps that was part of the minimalistic design trend of the mid 1990s. We don’t feel the button arrangement was well thought through and as a result the front panel looks rather empty and plain. Having said that the W7 looks more balanced to us than the longer W5. The expanses of flat metal are less vast and help the concentration of buttons look more proportionate.

The W5 is well put together, as you would expect from most Yamaha products. The end panels fit flush and neat to make it very clean and minimalistic. The main front aluminium panel does feel thinner somehow and the large flat surfaces are probably not as rigid as previous models. Most of the ones we’ve seen have scratches and dints. The keys on most also tend to be a little more yellowed than usual. All this suggests that the materials used may have been of a less durable quality that normal.

Our research tells us that the W7 was not a breakthrough in anyway. It was more of the same in a new package that looks underwhelming. We felt the screen is too small and the buttons don’t feel nice to press. The front panel arrangement is too condensed into one area and feels insufficient as a new model. It makes sense that the SY99 remained on sale as the W series were not good enough to take the flagship role.

The new positioning of the disk drive looks neater that the SY models and does away with all those busy lines, but as a result has lost that clever space for holding a few disks which was rather useful.

The W series also introduces a new double alpha dial. While this seems clever it is confusing and Yamaha never used it again on future models.

The Yamaha W synths also reverted back to just two controller wheels, but they introduced a rubberized texture (first released the previous year on the VL1), which was a nice touch and significant improvement over the all previous wheels.

Rubberized bender wheel texture, one of the few small improvements.

The double alpha dial, – Something new, but never to be repeated 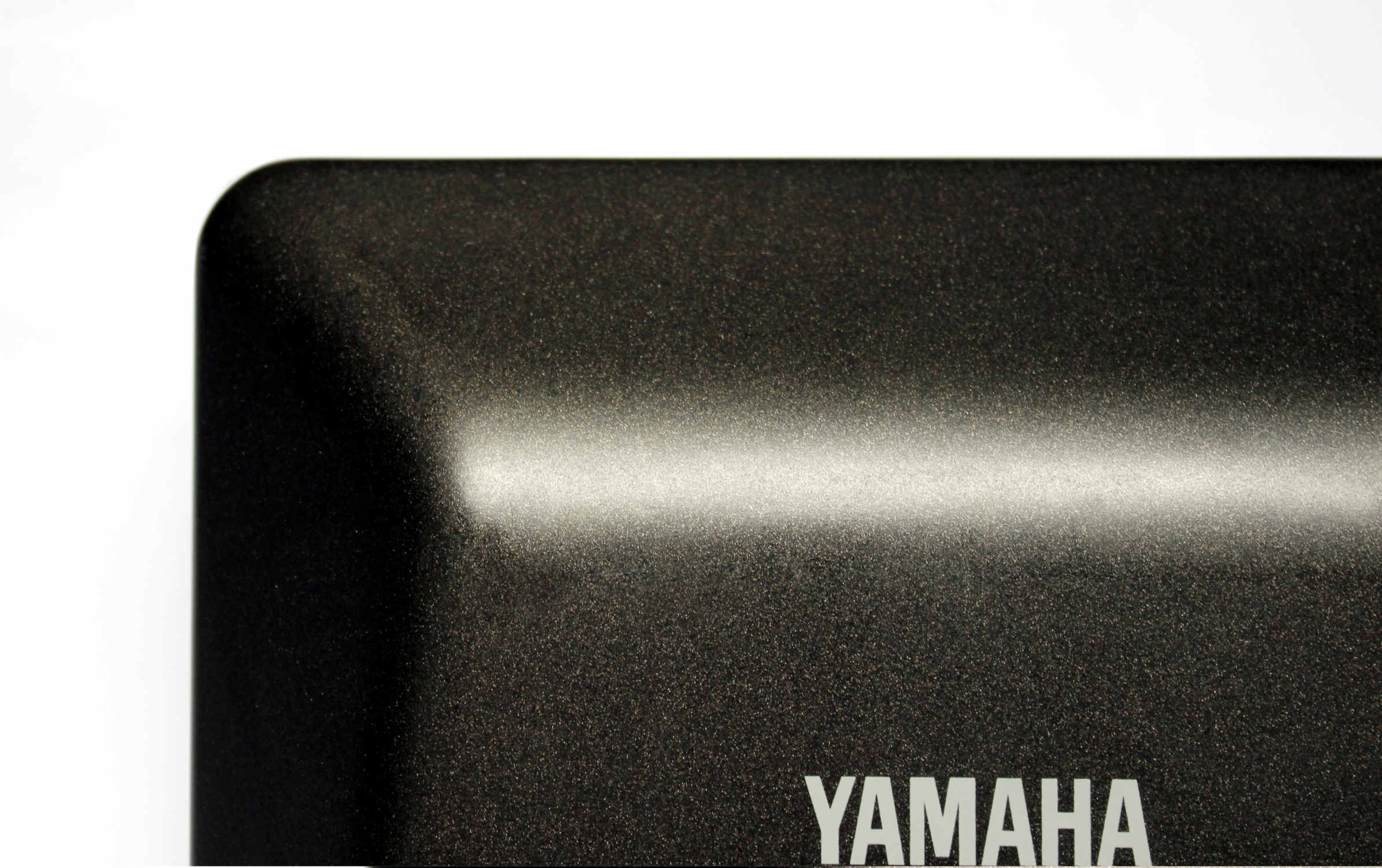 The W5 is very rare and probably quite undervalued. It’s unlikely to significantly rise in value given that it was not a breakthrough in any way. Even from a design perspective its rather bland compared to most other models. All those flat surfaces mark easily so it will be hard to find clean units.

This is probably going to be the Yamaha flagship synthesizer that most will forget but we will make mention that it is probably much rarer than most other Yamaha synthesizers. The Version 2 will be slightly more valuable than the Version 1. At the time of this review we could not find any images of the original case for this machine which makes that a worthwhile accessory to compliment your W5. We believe that they do exist as they are shown in Yamaha Product catalogs from that time. 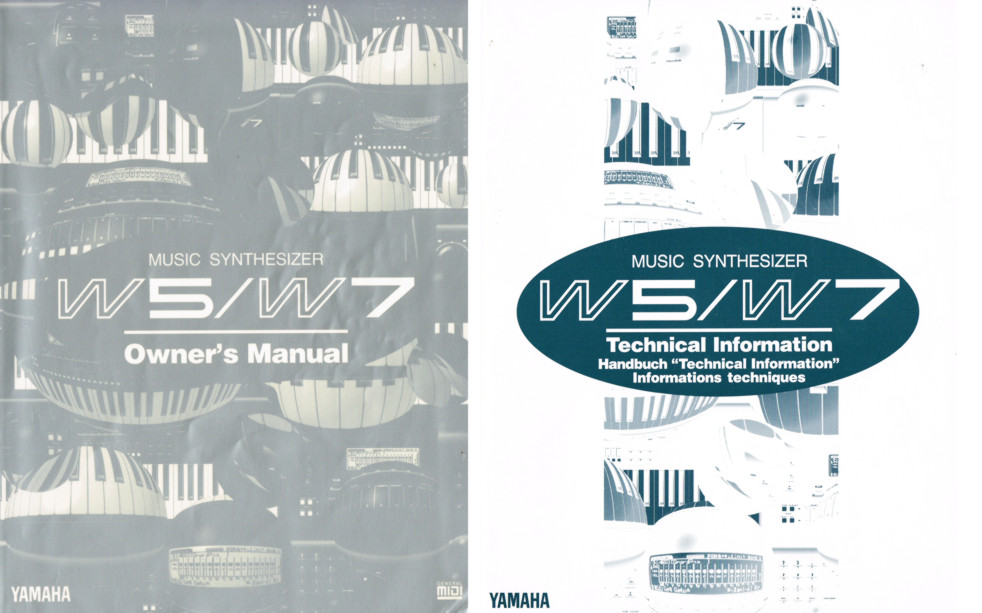 Original manuals for the W5 and W7 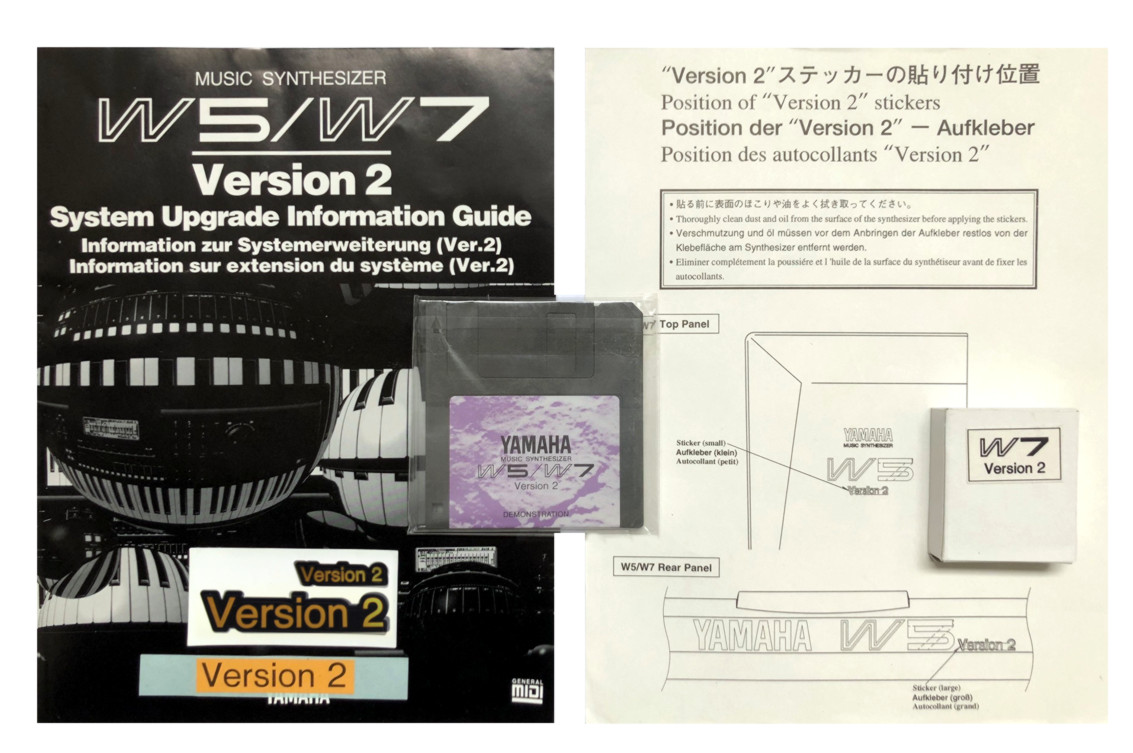 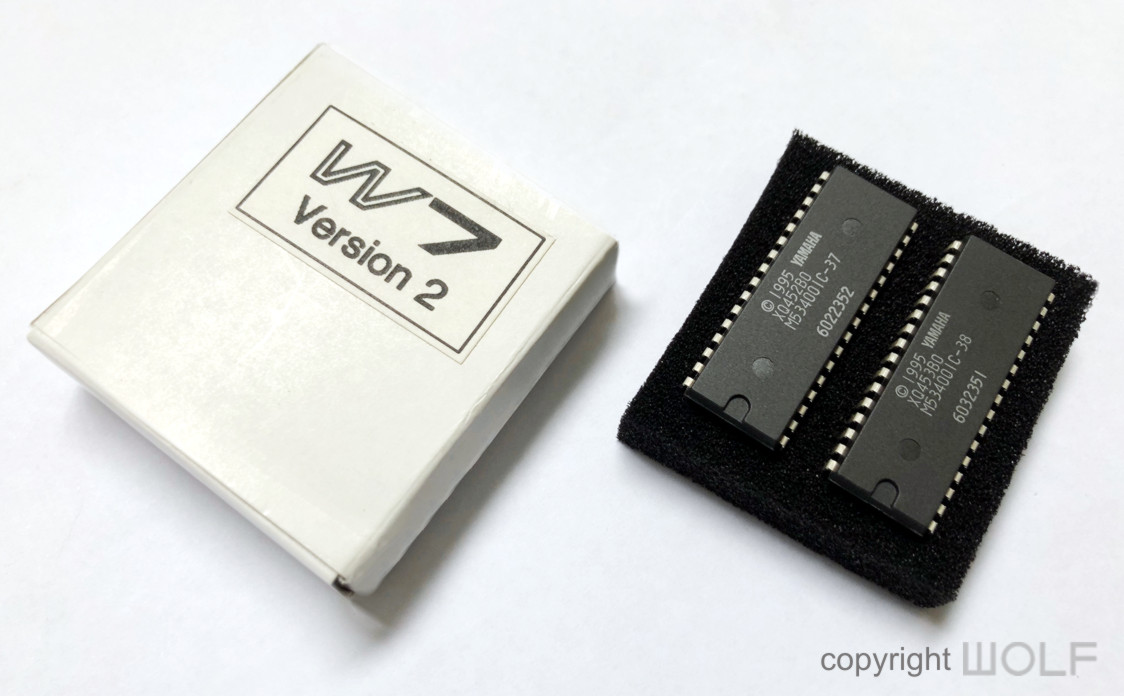 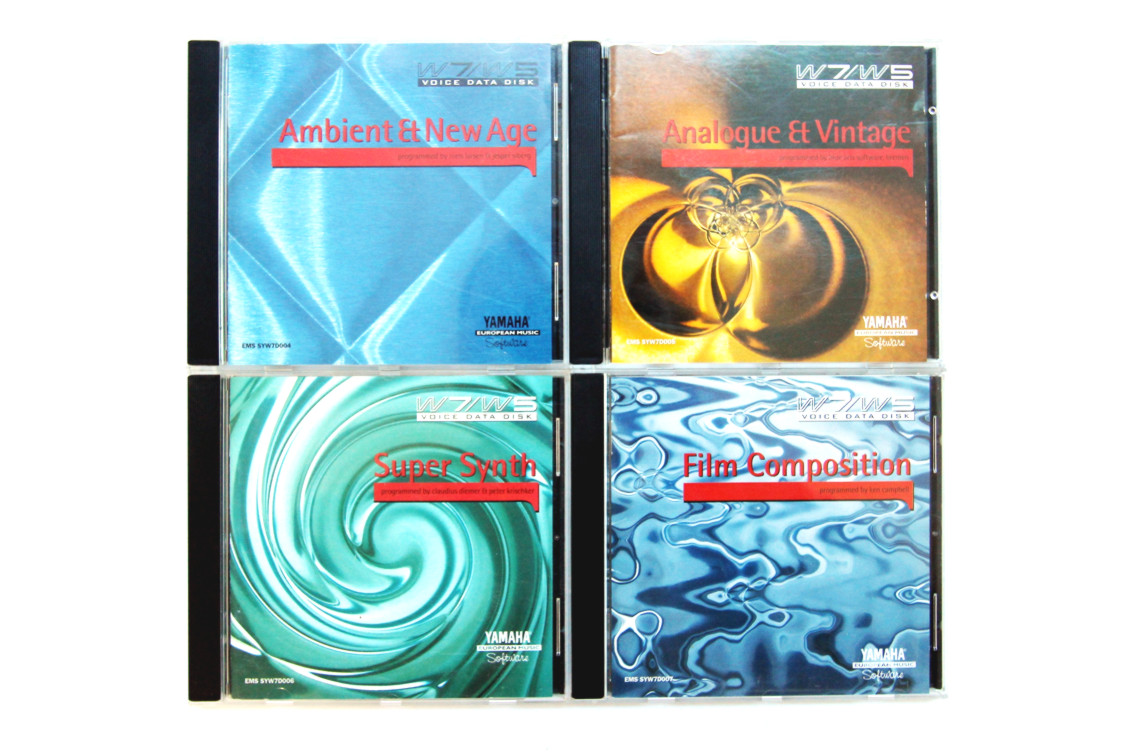 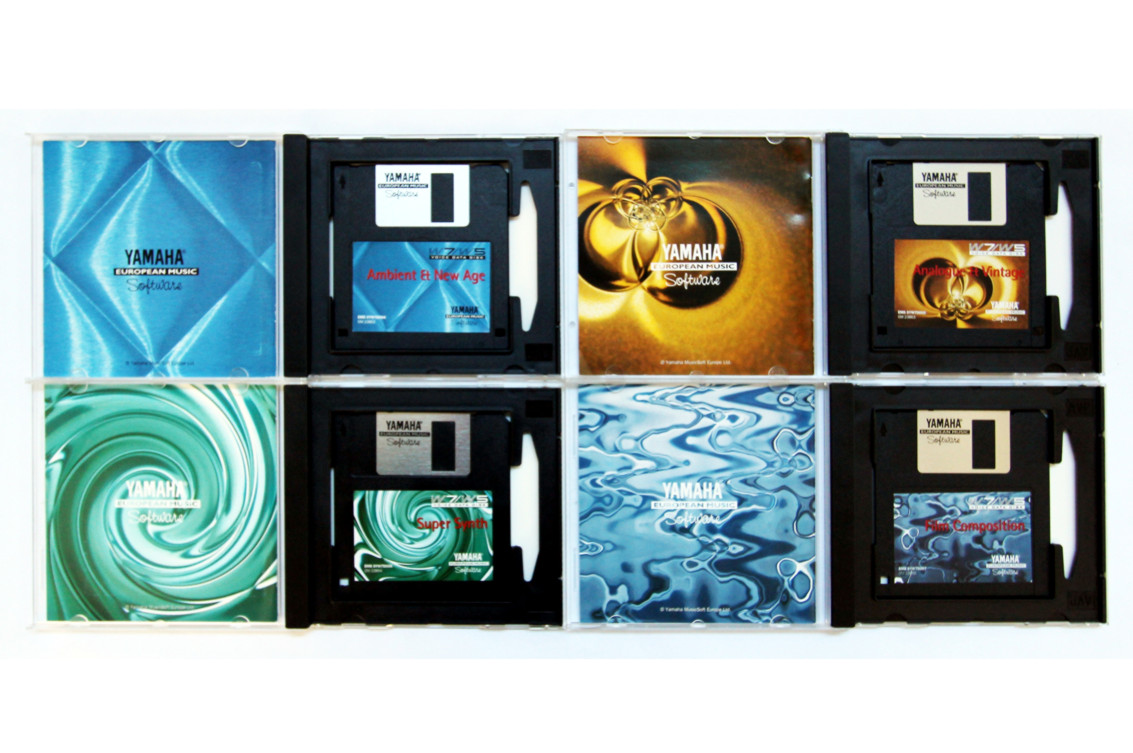 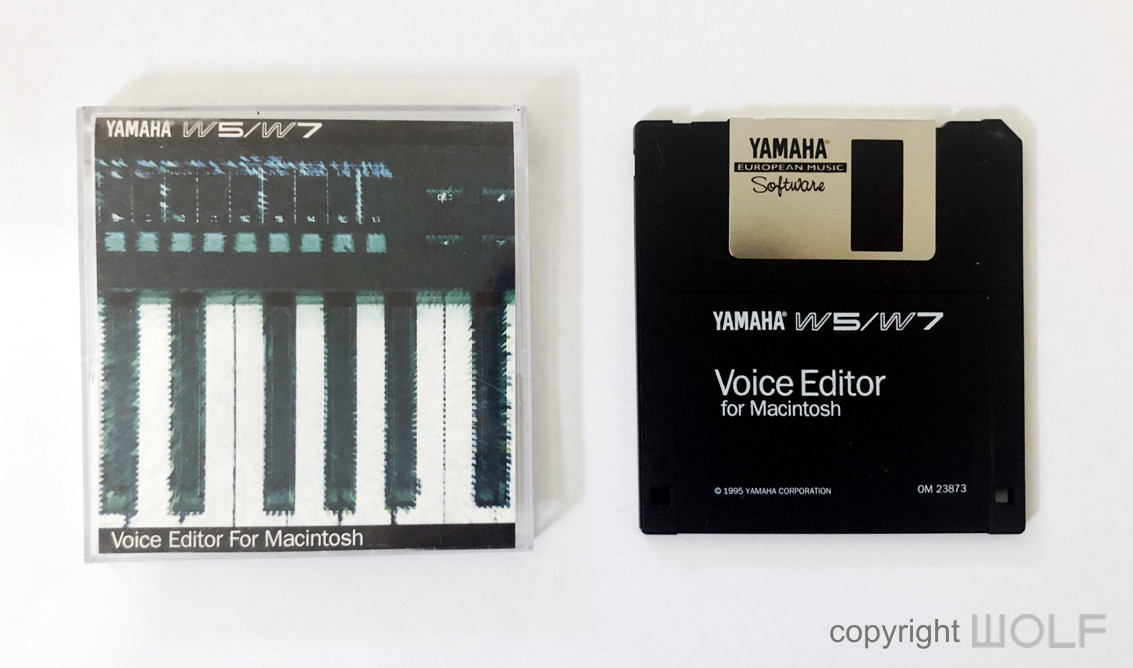 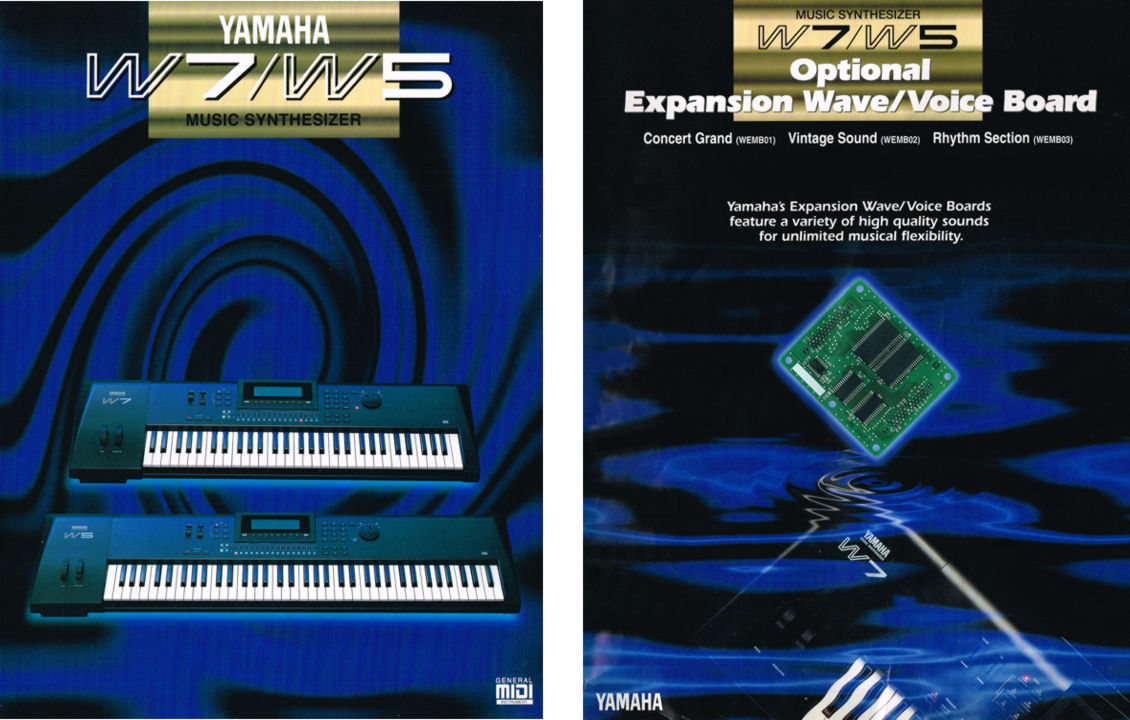 Original sales literature for the W5 and W7

These cases are rare and normally only found in Japan.

Another Japanese Catalog from 1995 that featured the W series as the main showpiece.

It almost seems as if this synthesizer was forced onto the market because the SY99 was getting a bit old and they needed a new product to compete with other brands. In hind sight they probably could have just given the SY99 an upgrade until the EX5 model was ready and available in 1998. An SY99 version 2 would surely have sold better than the W synth, but could they also make it cheaper?

Nevertheless, the W5 & W7 still form a part of the Yamaha’s Synthesizer story and if you do find yourself in front of a mint specimen it would be worth knowing that they are very rare. 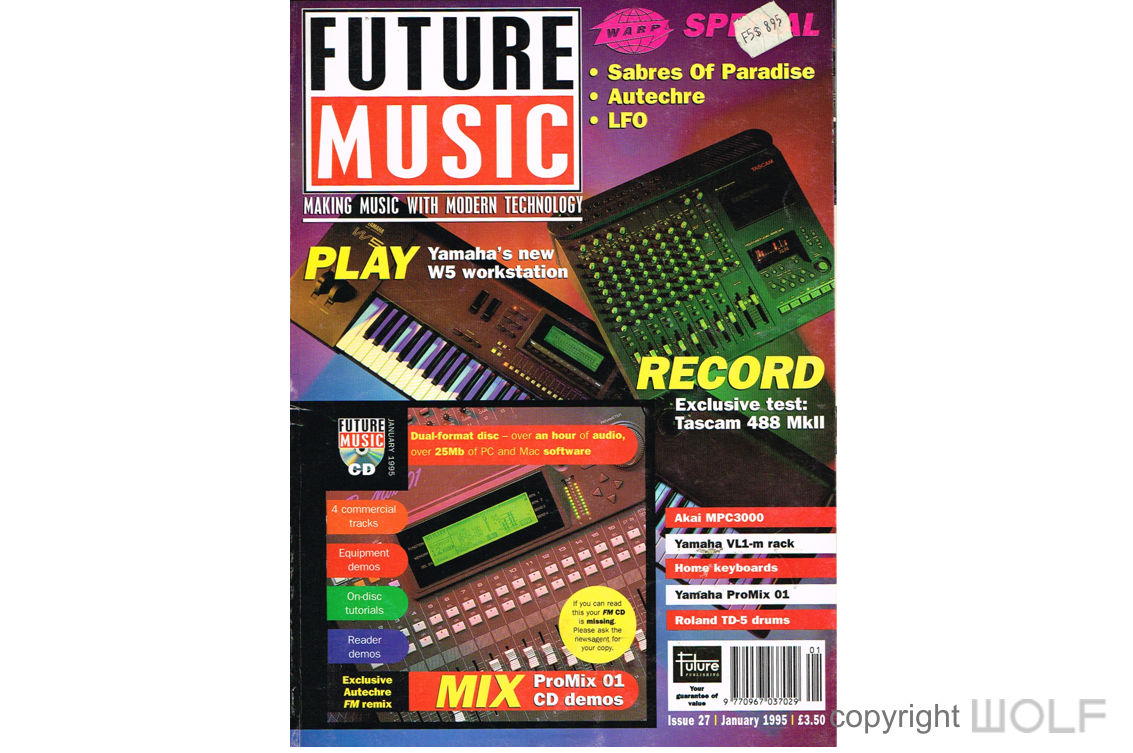 Future Music magazine in January 1995 Featuring the W5 on cover.

The W5 was one of the hardest synths to acquire for the WOLF collection. While inexpensive they are rare and even more rare to find in Mint condition.

The W7 was one of the last synths to complete the WOLF collection of flagship models. While inexpensive they are rare and even more rare to find in mint condition. Two specimens were purchase so that parts could be swapped to make one near mint example. Another one was later sourced from Japan just to have an original factory case. 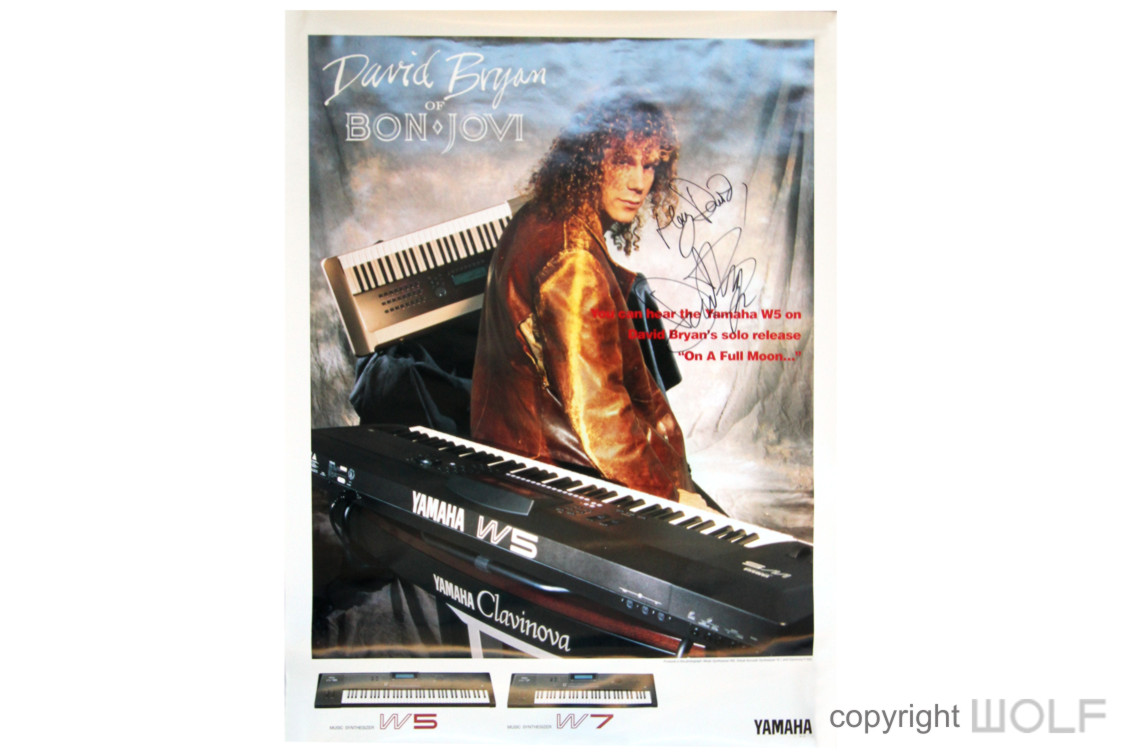