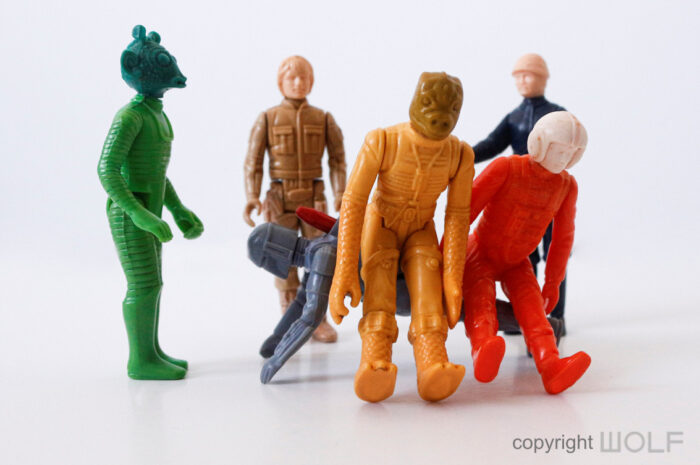 Ever wanted to see me under the make up?

Paint stripped figures are ones which have had all their original paint removed. In this form they look like how they appeared in the factory, fresh out of mold prior to painting. We quite like these figures for their sense of purity, being void of make up.

Some figures are made from up to three different coloured plastics.

Not all vintage Star Wars figures are made of the same plastics so a solvent that safely removes paint from one figure could in fact cause damage to a different one. Furthermore, most figures have differing plastic types from their limbs to their torsos, therefore dropping the whole figure into one solution won’t always work. Most paint strippers will melt the plastic and it may require extensive research and experimenting to understand what solvents work on vintage Star Wars plastics.

We won’t reveal the trade secrets behind the paint removal process but will say that with certain figures it can be very labour intensive. It’s usually a good idea to take a figure that is well worn with perhaps half of its paint already missing. Unfortunately, such figures tend to also be rather floppy, loose or discoloured. There is no point in all that effort for a poor result so choosing the right figure to strip is important.

With Vintage Star Wars figures being highly collectible and appreciating in value it almost seems irresponsible to take a figure and remove its paint. Some might even consider it to be wasteful vandalism. Naturally it’s not advisable to take a perfectly good figure and strip it’s paint, particularly if it’s a rare one. However, there are often figures that are incomplete and worn to the point where much of its paint is already missing. Such figures may be just beyond a paint restoration and thus good candidates for paint removal.

The point of removing a figures paint is to bring it back to looking newer than new, a state prior to the finishing process of painting. There is purity of form to seeing these characters naked without make up, but further to that, most do actually look kind of cool.

Curiosity also plays a part as some figures are quite different without their paints. The metallic painted droids like C-3PO, Death Star Droid and R2D2 can have surprisingly unusual or mismatched plastics underneath as the manufacturer often used whatever was efficient at that time. Such figures can have very large variations in colour.

Removing paint from a vintage figure is no easy task and if not done properly will cause damage. Depending on which figure it can be a painstaking process that takes many hours. The value of this work however is subjective and dependant on who appreciates the effort. Demand for paint stripped figures is small and as a result you don’t see many on the market.

Value is dependent on figure and often proportionate to the value of the figure. A figure like Boba Fett which has a lot of different paints will look more different stripped than a Stormtrooper for example that has just a little black paint here and there. Mr Fett is also significantly cooler and without his paints, and resembles those very famous early prototypes that are worth a small fortune.

It’s a relatively small and controversial market which makes the sale of such figures rather hit and miss. In most cases a paint stripped figure will be worth the same as one in its normal state but in some cases, they may well surpass expectations. Our advice is not to buy them as investments but for personal amusement only. They are rather curious and unique.

Because a paint stripped figure looks similar to a Test-Shot it’s important to purchase from a reliable and honest source. There will be people out there stripping figures intentionally to pass them off as Test-Shots or prototypes, so buyers must beware.

A paint stripped Boba Fett is rather cool!

Emperors Royal guard figures have heads that cant rotate, but with age some heads have been known to come loose as a result of the glue deteriorating with age.