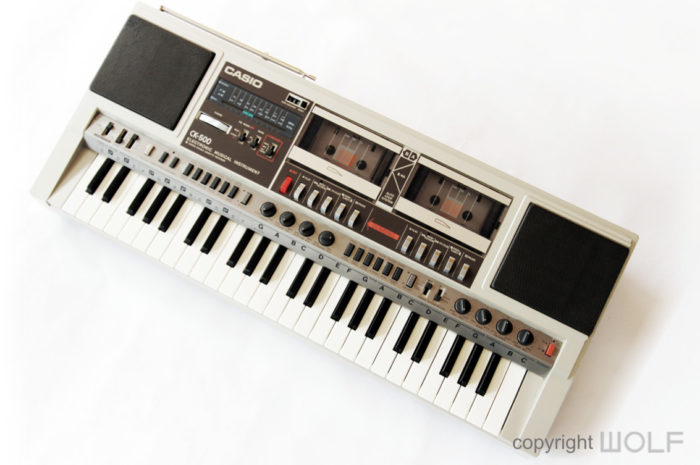 As with most reviews the focus is on a products design and its evolution within its industry. The functioning systems and sound quality are not necessarily considered.

Released in 1985 the CK500 was a mini keyboard that incorporated dual cassettes and radio.

Casio had several cross over machines that combined keyboards with radio and cassette or calculators. The CK-500 was the most popular and although still considered rare it does occasionally show up on the second hand market. Prices start at around $100US for working ones and go up from there depending on condition. A mint one that still has its box and paperwork could be worth as much as $500US.

There were 3 CK models produced- the CK-10, CK-200 and the CK-500. As the model number suggests the CK-500 was the biggest and most powerful. Unlike the CK200 which looks more like a boombox the CK500 looks more like a keyboard first despite having dual cassettes.

It’s cute but not cuddly. Dual cassettes in 1985 were a big deal because it meant that you could make your own tapes by copying from other tapes. The CK-500 would have been a cool toy in its day and we think that even now it will bring a smile to your average musician. It’s a fairly compact unit overall and with batteries would have been a great road trip companion.

Proportionately it is relatively well balanced due to its symmetry. The keyboard is divided down the center with an upper and lower half. The upper section is divided equally into 5 squares- A square speakers on either end with 3 square sections in between.  The lower half has a single row of buttons and dials with the keyboards below them.

Despite its compact size it does feel a little clunky, particularly from the side profile. The mini sized keys look further dwarfed by the rest of the machine.

The CK500 is relatively reserved in its colour scheme with only a few small splashed of red and aqua. The rest is composed of various shades of grey and silver.

Casio built good products in the 1980s and the CK500 was well put together. Apart from the grill mesh and antenna the rest is built from plastics, including those shiny chromed buttons. This helps to keep it light and portable, but does not feel cheap or flimsy. All that plastic however is vulnerable to scratching and many will have damage to their edges and corners.

Overall, the buttons feel good and work as they should. Casio probably could have incorporated a display screen of some kind but that might also have confused things. These crossover machines were novel toys and not meant for serious music production or playback.

While there initially appears to be a lot happening its really just a simple radio, cassette player and keyboard placed next to one another on the same continent. The main panel is well organised and simple to understand.

The CK-500 is certainly novel and will draw lots of attention. Although not nearly as rare as the CK-200 it is better value in our opinion with nicer looks. It represents the 1980’s quite well in a time of gadgetry and innovation. It’s rare, but many people don’t know about it, so you can find one for a bargain if you hunt patiently. A mint one with an original box or case is likely to be a sound investment in 80’s memorabilia.

While not ground breaking in technology it is certainly clever in how it’s packaged together. We think the CK-500 makes a great collectible toy for grownups, even if you’re not musician.

Taras Wolf’s fascination with Synthesizers and keyboards began in the early 1980s. The CK-500 was a serious contender as his first keyboard. Unfortunately, its small size and mini keys felt too amateurish and was ultimately passed up for Casio’s CT-810. The CK-500 in this review was purchased two decades later in April 2004.