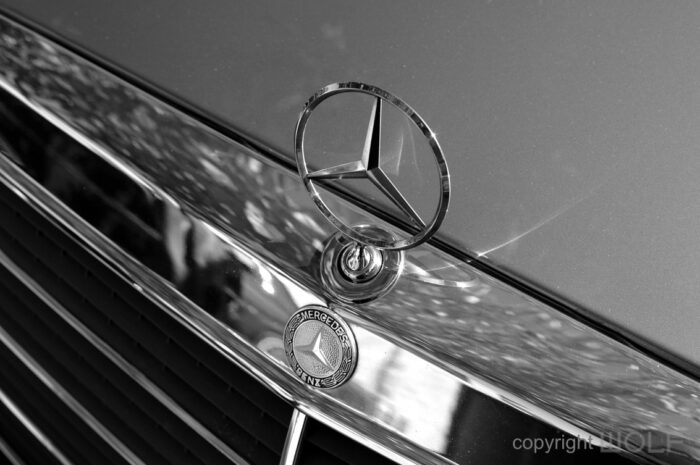 7380 units were built with only 702 in RHD. They cost around $40,000US when new which was up there with Rolls Royce and more than your average suburban home. They can still fetch $40,000 today for a sound example and may demand even more for a mint low mileage example.

Known commonly as just “The 6.9” it featured the largest engine of any non-American production car post WWII. It also introduced to the World many new safety innovations such as locking seatbelts, ABS braking and even the air bag.  As such it received numerous awards and accolades in its day as one of the best cars on the planet. It has been featured in many movies including an extensive car chase scene in the movie Ronin (1998).

Although hailed as the best car in its day this car is not ostentatious or particularly luxurious in looks. While it may have been a King on the road the 6.9 does not look like royalty material in our opinion. It has restrained elegance and was more suited to diplomats and CEOs. It was also the perfect Mobster car of the 1970s, especially in Black!

As a Mercedes saloon the 6.9’s looks were a big step forward from the W108 sedans born out of the 1960’s. Gone were the gentle lines and round head lights. The 6.9 was all straight and square which in its day quite futuristic.

The overall form feels like a thick slab of steel on wheels. While that sounds rather brutal and bulky it was in the 70’s quite cool and sleek. Those straight lines that were all about function and simplicity actually gave the car a certain amount of sportiness which most large saloons lacked.

The front of the car is quite iconic with one of Mercedes widest ever front chromed grills, flanked by big rectangular head lamps. The 6.9 even had wipers for those headlights, novel at the time. We think the double bumpers at the front and rear are rather busy and it seems strange why the side rubber trimmings don’t line up with the bumpers at the front.

Into the 80’s and 90’s this slab on wheels dated quite badly and it took a little longer than expected to enter classic car status. Fortunately, its solid German engineering and craftsmanship prevailed and by around 2010 these cars were finally appreciating in the true sense of a classic Mercedes. This car was one of the last to make good use of real chrome, wood and leather. Subsequent models started to make greater use of plastics which have not aged as gracefully.

Internally the car continues with straight lines that match the exterior. Safety standards required for edges to be softer and curved but overall, it’s a rather simple and linear composition. The 6.9 had Burl Walnut veneer and this woodwork is quite generous by modern day standards. Further to the wood there are just enough chrome trimmings to suggest that this car has class and worthy of its price tag.

Most of the controllers are designed purely based on functionality and nothing really jumps out at you. The air controllers in the center console are surrounded by Walnut venner with a protruding center with bevelling. There was probably a practical reason for that but it does look a little out of place as the only angle/bevel shape on the interior.

Beyond the controllers are generous expanses of leather, in this reviews example it’s like a sea of blue. In the back you feel like you’re sitting on a sofa and ready to be chauffeur driven away.

Real leather, wood and chrome are always a classy combination, and when assembled with Mercedes German ingenuity the quality is evident. Internally this car was hard to beat in the 1970s and most interiors have survived reasonably well. It’s not uncommon to find cars with all original interiors still in good shape.

Externally the car was built like a tank and everything was made to last. A good example of this can be heard and felt in the way the doors open and close. Its weight and solidness placed it in another league, miles away from its competitors. The 6.9 weighs around 3 tonnes and that was due to thicker steel and quality parts used throughout. Mercedes set out to build the best car possible without any consideration of cost. Their approach was simply to add up the sum of parts and charge that to the consumer. Guess what, buyers agreed to the price without hesitation.

We don’t normally comment on the mechanics and engineering but the 6.9 does not feel like an old car. Despite weighing as much as a small truck it’s very smooth and easy to drive. It has air-suspension, amazing technology for its day and with power steering the car still feels amazing.

The turning circle is incredibly tight and by today’s standards the car is not as large as it once seemed. It’s therefore quite practical to use in today’s urban conditions. With its vintage AMG style engine, you’ll occasionally want to floor it, and people will be astonished at how much acceleration this 70’s tank can do.

Internally everything is solid and nice to touch. The round air control dials were probably larger than necessary and feel rather primitive to operate. The Becker radio had finally traded all its classic chrome for black plastic but looks well suited to the overall design and works a lot better than on previous models. With four standard speakers Mercedes cars finally had stereo sound.

The 6.9 was the last Mercedes to make good use of traditional steel, chrome, wood and leather. Those ingredients not only exude class but makes that classic retro look. Modern cars with their large expanses of plastic will never capture that same old-world feel. While the W108 300SEL 6.3 is generally considered the first Mercedes with a super engine, it felt more like an experiment. The 6.9 is much more refined and feels to us more like the very first AMG model. There is no doubt that this car is a remarkable piece of human engineering and for that alone it deserves recognition.

Car values are now appreciating and the time to find bargains has probably passed. The good news is that you can find good original examples that won’t warrant full on restoration. Their prices are yet to enter the stratosphere like other Mercedes of that time, so now could be a good time to invest. For the price of a good modern car you could have a good original example. It will cost you significantly more in fuel and servicing but at least it won’t suffer depreciation.

In a time where roads are dominated by large SUVs the 6.9 finally looks classic and elegant. If you can manage its thirstiness you will enjoy its handsome looks. It’s still modern to drive and can pull a few surprises on the freeway with its vintage AMG engine.

The 6.9 had a radio as standard, but it was optional on earlier 450SEL cars. Those without the radio would have a blanking plate, similar to the one shown here. These plates are actually quite rare as most cars had radios and these plates were thus often discarded.