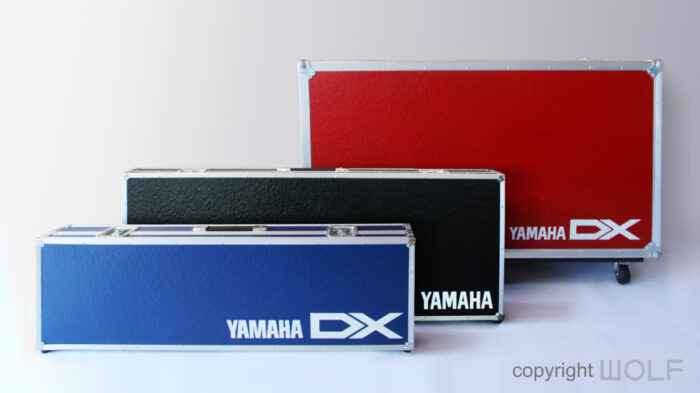 While most musicians value the importance of a protective cases, they often settle for aftermarket brands that are more affordable. This makes original factory cases significantly rarer. We understand that Yamaha produced all their cases in Japan, which could explain why they are quite rare to find outside of Japan.

Disclaimer: I’d like to be clear and upfront that I am not an absolute expert. The information in this article is based upon my own experiences, information, and research through studying second hand Yamaha gear over the last 25 years.  This information has not been verified or approved by any other authority. We do not have access to any actual figures from Yamaha, so some suggestions are based on our own judgment.

Is one of these Yamaha’s most rare synthesizer case?

This comparison review is between the different factory cases produced by Yamaha for their synthesizers from 1983 to 1999. Only original genuine Yamaha cases are considered in this review. All factory cases had the YAMAHA logo on one side, with the exception of the EOS models that just had EOS printed instead.

Yamaha produced hard cases, flight cases and soft cases. Soft cases are an affordable means to transport synthesizers but also offer the least protection. Hard cases are significantly more substantial with a hard shell, metal edges and handles. Flight cases were the most expensive and offer the best protection. They are as the name suggests, intended for travel, more particularly on aeroplanes. Most synthesizers had a least one type of case, but in some cases two different case types were available. This review considers all case types

Starting us off at number 15 is Yamaha’s most iconic synthesizer, the DX7 (1983). The bright blue flight case is relatively hard to find, especially in good condition.

Alongside the brown vinyl case was the LC-7H Flight case that sold at almost three times the price. In bright blue it actually made quite a bold statement

LC-7H case had a fibre-glass shell with a thick hairy texture.

The DX21 & DX27 also had a soft case that was quite sporty in design with black canvas and front pocket for accessories.

The DX21 & DX27 Soft case is the only Yamaha case we know of that sports a bright red interior.

The LC-21S was the last of the retro brief case look cases.

As popular as this little synth was, its factory soft case was very rare outside of Japan.

This case has never been seen in any Yamaha publication and initially we thought it was an aftermarket product. Having seen one in the flesh, the quality and design feels very mush like it could be a Yamaha product though potentially a limited edition or store exclusive.

To our knowledge the original DX7 did not have an official soft case, though this retro 80s case seems certainly made by Yamaha for the DX7.

Our top ten kicks off with a Yamaha store exclusive.

The Shibuya music store in Japan was Yamaha’s flagship store and they had an exclusive flight case. This case dropped the DX logo with the Stores details printed under the YAMAHA logo.

With the introduction of the DX7MkII, Yamaha went all out to offer cases that also looked great. The DX7MkII synths had three case variants from the onset- a Soft case, Hard case and Flight case. All three cases also fit the DX7S. The second generation DX7 was all about black colour. Not only were the cases black, but so too were the interiors and all the trimmings. The flight case was by far the rarest of the DX7MkII series.

The LC-7IIF Flight case was the most expensive and rare of all cases made for the DX7mkII. While it looks similar at a glance to the hard case, it is almost entirely different. The aluminium edges appear to be painted rather than anodized, and the main body has reverted back to the hard fibre-glass type material seen on the DX5.

The Flight case (top), had more heavy duty handles and latches than the Hard case (bottom).

A case we have never seen in the flesh, but we know it’s out there.

The Flight case is a rare sight indeed. This beat up example is the only one we have seen, and was for sale in Japan.

The DX27S with its built-in speakers was relatively rare, and the extra length from its speakers meant that it could not share a case with its DX27 & DX21 brothers. The SC-27S is a rare sight indeed.

The SC-27S was specific to the longer DX27S and looked quite out of place as the only non-black case in the Yamaha range at that time.

The DX27S was significantly longer due to its built in speakers so the case was like a stretched version of the soft cases made for the DX27 & DX21. This case was the SC-27S and curiously Yamaha used a rather old-fashioned cream colour canvas with brown trim. The DX logo was also dropped.

In 1987 Yamaha introduced the DX11 as a smaller brother to the DX7II. This was a very beautiful synth that is also one of the thinnest to date. The case for the DX11 was the LC-V, and apart from being one of the thinnest ever cases, it boasts being the first to use a new smoother material than would be continue to be used on other Yamaha synthesizers for decades. This hard case is very rare.

The LC-V, with the “V” standing for V2 which was what the DX11 was known as in Japan.

In 1985 Yamaha released the DX5 which was essentially a more compact and affordable DX1. Once again, these cases for the DX5 are rarer than the synths themselves. The DX5 hard case was made of the same materials as on the DX7, and DX1 but was black in colour. It marked the end of bright colours and the beginning of Yamaha’s preference for black coloured cases. The DX5 case was known as the LC-5H and is the next largest of all Yamaha cases after the mighty DX1.

For some unknown reason the LC-5H dropped the big DX logo and only had the name YAMAHA.

The SY77 was not rare, and neither was its hard case, but the flight case however is something that shows up once in a blue moon. Perhaps that’s because its…”Blue”?

This flight case came with an SY77 Purchased from Japan. We believe that it could be the elusive LC-SY1F. It is the exact same size as the hard case, with the same edges, corners and handle. It also uses the same surface material found on the DX7II series hard case, except in a dark blue. The only doubt we have is from the fact that this case does not say YAMAHA on one side. It’s possible that it wore away as many DX7II hard cases lost their logos due to a poor adhesion between the label and the rubberized surface. Or perhaps Yamaha simply did not put their logos on this flight case. If we ever find another SY77 flight case, we may be able to confirm.

In 1987 Yamaha celebrated it’s 100-year anniversary with the DX7 Centennial. A very limited version of the DX7IIFD in silver with gold buttons, glow in the dark keys and an extra octave. This synthesizer had its own case but very few seemed to have them.

The factory case for the DX7C looks like a longer DX7IIFD flight case, but in fact has quite a few subtle differences.

The surrounding plate of the latch is painted in flat black. The logo is in silver rather than white. The handle is borrowed from the original DX7 case.

The LC-DX7IIC has a special compartment underneath for safely storing the music stand and any ROM cartridges.

It is named in original Japanese Yamaha literature, but we have only ever seen the VL1H. If all of these do happen to exist, then surely the cases for the VP1 itself must be the most rare as the VP1 was Yamahas most rare synthesizer ever. Only a handful are said to exist so possibly one might have an original case. So unknown and mysterious are the VL cases that it might just be possible that they some were never actually produced. In which case they are banging the door for number 1 spot (in theory).

This VL1H from Japan is the only case we’ve ever seen for the VL series.

Available at the same time as the DX7 was the LC-1H made specifically for the legendary DX1. The DX1 is one of Yamahas largest and most magificent synthesizers.  With only 140 said to have been produced it’s an extremely rare beast but even more rare is its original factory hard case. The LC-1H was bright red and sold for 120,000 Yen. Very few DX1 synths had its original factory case, which meant that these cases are more rare than the synths themselves.

So large was the DX1 and its case that YAMAHA cleverly gave it wheels. It is the only Synthesizer case we know of to have wheels.

At 120,000 yen the DX1’s Red factory case cost more than some synthesizers at that time

A size comparison between the cases of the DX1 and the DX7.

Not quite making the cut because they are still relatively young and hard to quantify, but worth a notable mention are the factory cases for the EX5 & EX7 synths launched in 1998. The EX5 was a relatively big instrument and the case had two grab handles on the top side- a first for Yamaha cases. We don’t see many EX synths with original cases so suspect that its original case is reasonably rare.

So there you have it, the fifteen most rare Yamaha synthesizer factory cases….in our opinion!

An EX5 snuggly fit into its factory hard case.