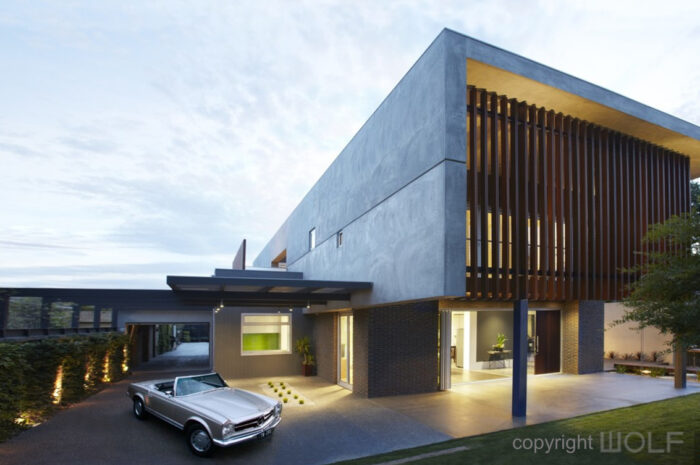 As a child I observed my father buy, restore, enjoy, sell and then buy some more. Some cars were bought as classics, and others were just modern cars for daily use, but always was there a Mercedes, or two.

Naturally I found a similar interest with a passion that now spans across four decades, allowing me to witness everyday cars mature into collectible classics. My fascination is less about the value or rarity of a classic car, but more to do with how they make you feel. For lack of a better expression I call this feeling “Cool”, and it’s a phenomenon more commonly felt in classics that are well driven, rather than with those that live untouched in showroom garage spaces.

There are also particular relationships between drivers and their daily classics with key ingredients towards that sense of coolness. I was one of the youngest Mercedes classic car enthusiasts around and have always considered myself cool when driving a classic Merc. Back then the cars were older than me, but today my cool classic Mercs are often younger than me. This led me to ponder on what exactly makes a cool classic car, and if there is a way to identify the perfect classic car at any point in time?

My focus is on Mercedes Benz cars, though  some information could relate to other car brands. This article is not about identifying the next or most desirable classic Mercedes, but more about finding the right “Cool Classic Mercedes”. I’d like to be clear and upfront that I am not an absolute purist or expert. The information in this article is based upon my own experiences, information, research and has not been verified or approved by any other authority. I’ve written this primarily for my own clarity so it may not work for everyone.

What is a Cool Classic?

A Cool Classic Mercedes is one that makes you feel very “Cool”. To be considered a classic, such cars are at least 25 years of age. They won’t necessarily be expensive, but should be in excellent condition and practical enough to be used regularly. When driving such a car you draw confidence from how the it compliments your personality, and you can’t help but smile every time a head turns. While virtually every car around you is depreciating, your investment on wheels appreciates with each passing day. It’s an intelligent investment that is satisfying because it’s an asset that you can use regularly with enjoyment. Unlike shares or money in the bank, a classic car is something tangible that you, and those around, you can touch and appreciate.

What makes a cool classic?

I believe there are 5 key ingredients necessary for a classic car to be cool to its driver.

Perfect Age– not every car that is 25+ years has that retro feeling. Mercedes cars were always very advanced and traditionally have long lifespans of several years with a facelift in the middle. They should therefore be determined in context of their production run. Many will cross over different decades and fashion trends. A Mercedes that may be relatively young might therefore look quite dated if it was one of the last off the production line. With this in mind, I believe that a car should primarily be considered from the date of model launch. This gives the car more relativity and perspective to its design and styling. Take the W113 Pagoda for example which was launched in 1963 and continued until 1971. A 1971 model however will not look like a 70’s car because it was conceived in the early 60s.

The W107 Mercedes SL that came after it is even more interesting because that car had an 18-year production run from 1971 to 1989. Is it a 70s car or an 80s car, and which model should you buy? Naturally each car model is unique, but for the purpose of finding a general formula I find that the first year of production and the mid-point of a cars production span, bare significance.

30 years from the day of car model launch is when I believe a car achieves a certain maturity or status as a true classic. Such cars should have emerged well out of retirement with strong appreciation. I then suggest cross checking this by observing the same model car, 25 years on from the middle of their production run.

Therefore, it’s safe to say that between 1992 and 1993 the Pagoda model was in contention for being a cool classic Mercedes. I call this the “Sweet spot”, when there is still a good opportunity find good cars at affordable prices. Beyond the sweet spot the car should continue to appreciate and exude coolness.

What about the W107 SL Mercedes with its 18 years of production?

According to my formula, the W107 had its sweet spot between 2001 and 2005, but in reality, those cars were mostly just holding their value. It took a little longer for prices to really appreciate. Immaculate, Low mileage cars however are a different story and that brings us to my next ingredient.

Condition and Originality. The demand for very low mileage cars continues to grow with many collectors now choosing original un-touched cars over fully restored examples. Certain things can get lost after a restoration and you never get them back. While very low mileage cars can be an exception to some rules, you can trap yourself by not wanting to add more miles and thereby not getting the enjoyment of usage. The point of a cool classic is to be seen doing everyday things such as going to the supermarket and being the stand out in the car park.

Practicality. As mentioned before, you can’t be cool if you’re sweating, because there’s no air-conditioning, or if you can’t keep up with the traffic speed. A cool classic should be practical enough to be used as a daily driver, though realistically you may only use them on weekends. Most cool classics tend to be either sports cars or the top of the range big-engine sedans that come with the most options. Traditionally the top of the range SL and S-class Mercedes have always performed well as classics because they were often ahead of their competition with the most advancements. These were the cars that only the rich and famous seemed to afford which leads us to the next ingredient.

Memories. It’s not always those poster cars that belonged to the rich and famous. Sometimes it could just be the beloved family car that invokes special memories. A cars appeal can be personal and your version of “cool” could come in the form of a station wagon or more common E -class. Provided the car is still reasonably competitive on the road with time warping capabilities, you will get that cool feeling and surprised expression from those around you.

Although much of this article can apply to other car brands, my theories towards Cool Car investment applies more directly to Mercedes Benz for a few reasons.

There are many Cool Classic Mercedes models in existence because most hold all of the key mentioned ingredients. The issue is that such cars already demand a premium. Ideally you want to find a car just before prices escalate. Not only will this feel softer on your wallet but leaves good time to source any spare parts you might need. Those relative parts tend to also be as affordable, especially if they can be sourced outside of Mercedes.

Getting ahead of the game requires a 5-year buffer by reducing those previously mentioned years of 30/25 to 25/20. As I write this article in 2021, I therefore imagine that Mercedes cars of the late 90s could be entering their sweet spot. Identify a car from that era with the 5 ingredients, land yourself a good one and you might find yourself with a bargain future cool classic.

To me the answer is “yes”, because as with all things in life, nothing physical lasts forever. What seems cool today may not be so tomorrow, and that is worth noting as timing is very important when deciding on the right cool car. Take the W113 Pagoda for example, which was extremely cool and relatively affordable throughout the 1990s and 2000s. Then prices rose steeply as many collectors embarked on full restorations. Clean examples today are asking $300,000+, and unless you have too much money it’s hard to fathom such cars as daily drivers. Furthermore, they are getting on a bit with even the youngest cars now over fifty years of age. Don’t get me wrong, the Pagoda is still a highly desirable and sound investment, but it no longer fits into my description of “Cool Classic Mercedes”. At the time of this article the W107 SL has taken the cool mantle, but eventually it too will hand over it’s crown to the R129 SL that came next.

I don’t think you can be too old or young to own a Cool Classic Mercedes, because I don’t believe we are ever too young or old to be cool. The coolness I refer to however is not about what other say or think. It’s about how you feel, and in this case, how the car makes you feel. The idea of having a connection to your youth or past is therefore quite important because such bonds make your driving experiences so much more….”Cool”!

The information in this review is intended for informational or educational purposes to provide readers an understanding of how something may be seen from a certain perspective. In this case it is from the view point of WOLF DESIGNS.  Information further to being of an opinion is provided to the best of our knowledge based on our own research at the time of writing this article. We cannot be held responsible for any inaccuracies or inconsistencies and reserve the right to change or update any content as appropriate.
The final responsibility of the design resides with the original manufacturer.