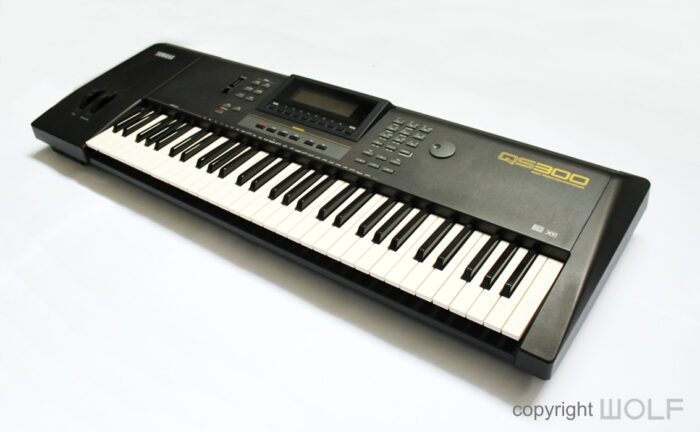 The Yamaha QS300 followed from the W series as a simple and easy to use workstation. Physically it is almost identical to the W7 as it shares many body components. Yamaha seemed to create this instrument as a more affordable alternative that took advantage of the new XG system.

As an affordable workstation they were relatively popular and can be found on today’s second hand market quite easily. Owned mostly by amateur musicians they escaped heavy studio or concert use. Expect to pay between $250 and $350 depending on condition. We would consider $400+ for a mint example that comes complete with accessories such as original case, manuals, pedals and sound disks.

It’s interesting that the QS was not called something like the W9, especially as it clearly is of W heritage/family. We also don’t know why 300 was an appropriate number? As such the QS300 has the privilege of being the only Yamaha keyboard to Begin with a “Q” and also the only one to ever have a number “3” in its name.

As with Yamaha’s W synths, the QS300 looks rather basic and nothing new. To the unfamiliar the QS300 would easily be mistaken for the W7 as it shares many identical body parts. The screen remained the same as previous models, and at a time when KORG produced synths with screens twice the size, Yamaha’s screens across all their product range at that time were inadequate by comparison.

The body is painted in a metallic black and is like the W7 but with different buttons. The rounded wedge-shaped ends are simple, gentle, nice to touch, and still remains the best design feature inherited from the W series. The screen looks like it should be adjustable but is unfortunately fixed. Yamaha dropped the 16 small white translucent buttons under the screen of the W synths and replaced them with 6 standard looking buttons on a painted grey background. Grey paint is probably the main thing that stands this synth apart. This was Yamaha’s first synthesizer to have grey coloured buttons. Yellow graphics were also a first, though it’s a rather dull and sickly tone which does not do any favour to this synths rather boring looks. That yellow however, is the easiest way to distinguish the QS as different from the W7.

With so much space on the front panel it seems odd that the designers did not spread things out more or use larger buttons. Perhaps that was part of the minimalistic design trend of the mid 1990s. We don’t feel the button arrangement was well thought through and as a result the front panel looks rather empty and plain.

The QS300 is well assembled, as you would expect from most Yamaha products. The end panels fit flush and neat making it very clean and minimalistic. The main front aluminium panel does feel thinner somehow and the large flat surfaces are probably not as rigid as previous models. It’s hard to find a unit without a few scratches or dints. The keys on these, as with the W synths tend to yellow with age. All this suggests that the materials used may have been cheaper and less durable as required to create a budget conscious instrument.

Apart from XG, this synth was more of the same in a new package that looks underwhelming. The screen is too small for 1995 and the buttons don’t feel nice to press.

The labelling of notes and chords on the panel just above the keys make this unit feel like an expensive toy for beginners, and perhaps that was the intention.

The controller wheels have a nice rubberized texture and disk drive is neatly hidden underneath the left end panel. The right end panel and LCD screen housing of the QS300 are literally identical to those on the W5 and W7.

The QS-300 is a simple and unoffensive synthesizer that will probably be lost in time, if not already forgotten. A name starting with a “Q” with a bit of yellow and grey colouring didn’t make it stand out enough. Although a first to have XG, it’s still no big leap forward in design or technology.

In our opinion the QS300 rates rather low for desirability and collectability, and only required if you are a die-hard Yamaha fan who wants to own every synthesizer they ever made. For most other collectors there will be plenty of other investments for the same dollar amount.

According to trade literature the QS300 shares the same hard case as the W7, the LC-W7H. Interestingly the QS300 is 14mm shorter in length than the W7.

The QS300 in this review has a case with Yamaha’s tuning fork logo in front of the name Yamaha. All subsequent cases had this design, so the QS300 was potentially the very synthesizer to have this case design.

One wonders if the QS was really necessary, or could Yamaha have just made a W7 version 3. The fact that it looks so much like a W7 is evidence that it was probably rushed onto the market jfor a few extra bucks. This synthesizer has one of the lowest scores of all the reviews done to date at a mere 5.5. We would only consider a mint specimen selling at a bargain price.