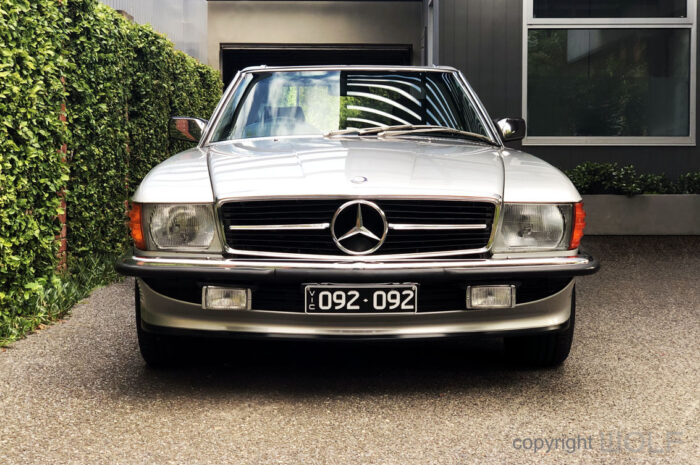 The word that comes to mind is “Strong”. While not a large sports car by today’s standards this car was a significant increase in size, strength and stability in its day. The 107s did away with curves in preference of straighter lines that keep the car parallel to the ground.

The 560SL was the last variant of Mercedes third generation of SL sports cars. Designated by code as the W107 this SL was produced from 1971 to 1989, evolving through several engine variants that culminated with the 560SL. Being the last of the range and with the more powerful engine the 560SL is more highly sought after and often more valuable.

The 107 Mercedes was a popular and successful sports car and have survived in significant numbers especially in the USA.  At the time of this review, good 560SL cars start from $55,000 (Aust) and can extend well past $100,000 for near mint examples. Low mileage original examples are particularly sought after as these cars are not only collectable but still very practical and modern to drive.

The 107 Mercedes had a production run of 18 years which after the G-wagon was the longest of any Mercedes and even in comparison to other car makes. A facelift in 1986 with a front air dam improved the look until 1989 when the R129 made its debut. The 560SL model was only available to the USA and Australia, therefore only Australia had right hand drive 560SL cars.

This car was featured in many 80s movies such as Beverly Hills Cops, which helped to make the car a relatively iconic SL.

This was Mercedes first sports car to do away with round lights in favour of rectangular ones. While this break from curves in favour of straighter lines was very futuristic in its day the car, it is certainly not sleek. In fact, this car would be rather bulky without its horizontal lines and chrome trimmings.

As with most Mercedes cars each detail is well considered and appear together as one language- the Mercedes language of practical engineering and beautiful design. Interestingly this car has retained the unique concave shape in its hard top roof, something that coined the nickname “Pagoda” in the previous SL model range.

From the front this SL maintains the large Mercedes grill with star in the center. It’s a classic SL grin with good presence. In our opinion the styling of the front is a little safe and we think the intersections between the headlight, front grill and bumper could have been resolved better. The facelifted models look visually superior with the new lower air- intake design. It had more continuity with proportions and lines to its surrounding panels and overall made the car a little more aggressive.

The sides of the car have more character, with horizontality that runs right around the car. This is especially emphasized with the bands of several horizontal grooves on the lower side panels.

From the rear this car is dominated by large corrugated tail lights. This design is said to be self-cleaning and iconic to Mercedes in the 70s and 80s. The 560SL had a rubber spoiler on the boot that serves no real purpose and looks rather tacked on.

The horizontal lines below the front and side bumpers remain unique to the 107 SLs and help to reduce visual bulk.

So much of Mercedes styling in that era was influenced by safety. Internally all surfaces are considered from the perspective of crash safety so there are a lot of padded curved forms and rounded edges. It is conservative by any sports car standard and nothing particularly grabs your attention or looks out of place. Genuine wood veneer panels with chrome trimmings give the feeling of luxury without being ostentatious. The facelifted models from 1986 onwards had two toned vinyl dashboards with the upper section usually darker than the lower section. This gave the interior a slightly sportier look.

The seats and side panels were designed for long trips, so were more about comfort than shape or colour. There was an option to have Karo seats which incorporated a patterned fabric. In our opinion they made the car look more traditional but some people would say they gave a sportier look.

These cars were nicked named the Panzerwagen (Tank in German) when it was developed because it was incredibly solid and heavy for a sports car. Walking around the car you sense its build quality in the way it feels and sounds. The metal is thick and there is a definite stiffness about the way the car stands. The substantial doors close with real conviction and you wouldn’t want to get a leg or finger caught in the process.

This car was is a great example of German engineering at it’s finest and is why so many examples survived in good condition.

As with the previous SL, this was considered an open tourer as opposed to a fast-grunting sports car. It was the car you drove around all day in comfort and style. While not loud and low to the ground like a Porsche, the 560SL in this review is still very fast and fun to drive. The drive is smooth and effortless. The 107 SL cars also made you feel very safe behind all their safety features.

Most Mercedes cars begin to achieve classic status when they turn 30 years of age. That was definitely true of the W107 cars as many started to fall into collectors’ hands around the time of the new Millennium. However, the appreciation was not as consistent or sharp as you’d expect and that may have to do with the cars long production run. While the earliest cars were turning 30 years old, the last ones off the production line were still just 11 years old. Only in recent years have these cars really started to take off, especially as the former W113 Pagoda models become too expensive for the average enthusiast to collect.

Good low mileage examples do exist in reasonable numbers but you’d better be fast and ready if you’re to secure one.

In our opinion the 107 SL looked dated from the moment it was launched. That was mainly due to expectations for a more wedge-shaped car as seen in Mercedes C111 experimental car (that never made it to commercial production). Furthermore, there were other cars on the market by Porsche, Ferrari, and Lamborghini with far more aggressive or streamlined shapes. By comparison the 107 was rather boxy and square. Rubber bumpers and chrome trimmings were no longer contemporary, especially into the eighties.

All that square geometry and chrome however, has now added to the cars retro cool looks and classic status. We think the car looks more interesting now than when new, and seems to be getting better with age.

The WOLF colour of choice for this car is silver, but it’s also quite stunning in darker shades with contrasting light interior colours. A top of the range 560SL is our recommendation as an investment and enough power to feel like a sports car.

A spoiler that spoils the look.