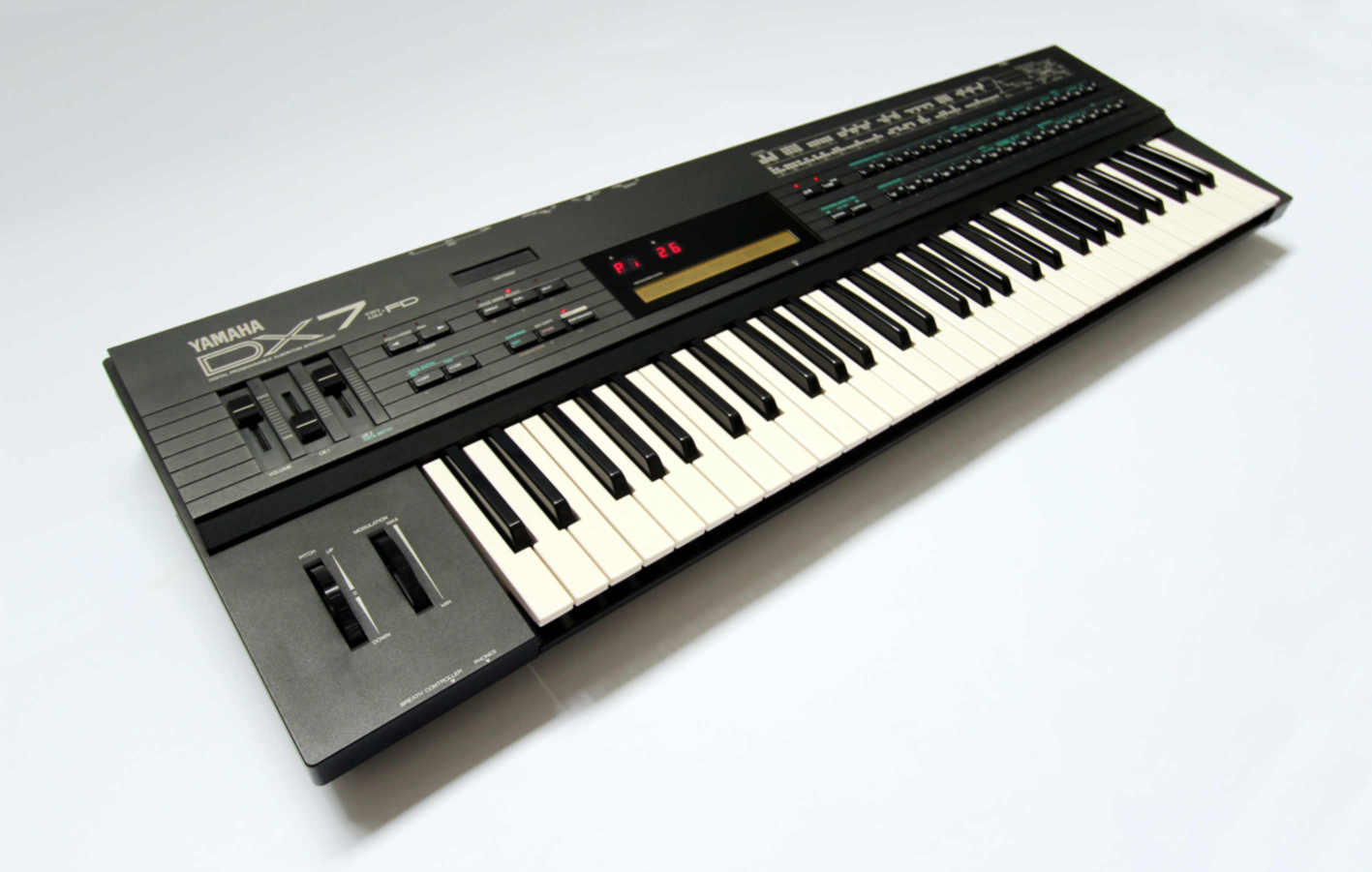 It’s very difficult to follow up on something as sensational as the original Yamaha DX7 which still remains one of the bestselling synthesizers of all time. Yamaha did the obvious and took what was already very good and made it better. The DX7IIFD was a natural evolution and kept the DX brand going for a further 3 years.

These were solidly built and have generally survived well.  An average one today with some signs of wear but still functions perfectly will start at $500. Mint examples are not uncommon as these machines are so well built and can cost up to $800. We would expect to pay $1000+ for a mint example that comes complete with accessories such as original case, manuals, pedals and sound cartridges.

Following the original DX7 were, the DX7S, DX7IID, DX7IIFD, and finally the very rare DX7C (Centennial edition).  The DX7IIFD & DX7IID were identical except the FD had a floppy disk drive. The DX7s looks similar externally but with a smaller screen. It is significantly inferior and essentially just the original DX7 repackaged in a new body some some improved internals for better sound quality.

Our first impression was that it looks very true to the 1980s. Yamaha made the right decision to ditch the brown and make it “Black”. Every new piece of audio gear at that time from Speakers to Walkmans were black. While it is proportionately similar to the original DX7 it physically looks very different due to a few updates that are obvious upon first view. Firstly, the unreliable membrane buttons were replaced by actual push buttons. The yellow backlit screen is larger than that on the previous model and there are two new control sliders next to the volume control.

It looks as good today as it did in 1986 and that is mainly due to its solid build and practical layout. The face plate is a single 2.5mm thick sheet of aluminium. The push buttons are positioned perfectly within a series of 1.5mm wide horizontal groove lines that run the length of the face plate. The screen is housed in a large acrylic panel that looks very slick and cool.

The excessively thick faceplate has been expressed quite brutally on the sides. It’s industrial looking but somehow still feels more streamline than its predecessor. The surface is not smooth and has a very fine grainy texture that adds to the solid feel of this machine. There is also a slightly glossy sheen to the black paint.

On the underside of the end panels Yamahas Designers introduced corrugated sculptural ribbing which improves grip when carrying this unit by the ends. At the rear Yamaha proudly has its name with a new logo design for the “DX” with a double lined font.

As with the original DX7 there is a pitch bend and modulation wheel on the left end panel and they look to be the only parts designed identical to the original though in black.

The disk drive location was neat and clever but not the most practical.

The body is robust and composed of a solid industrial quality metal face plate and rigid plastic end panels. It was designed to survive studios and concerts and Yamaha must have learnt by studying what did not ware well on the original DX7. The Mk II Yamaha gained small bumpers on the back of the end panels in anticipation of being bumped around. We think these could have been finished with neat rubber ends for further strength and protection. The front corners are neatly rounded with plenty of space to rest your left hand, which us useful if you enjoy using the pitch bender wheel.

The more you study this machine the more you sense and appreciate its build quality. It looks and feels purposeful like a stealth military tank. If you took away the keys it looks indeed like a high tech piece of military equipment. Despite its strength and rigidity, it is a whole 3 kilos lighter than its predecessor.

One of the best designed buttons we know of.

The keys feel nice and were highly praised back in the day. The white keys are intentionally warm in colour like ivory.  The push buttons connect in a unique way that encourages the user to run their fingers over them as a fast way to scroll through different sounds or editing functions. Users from the day will remember this action with its distinct sound and feel, unique to the Mk II DX7. The screen is beautiful and has a clever way of glowing more yellow and bright when it is dark. The graphics are of a high-quality print and keep the user well informed.

The MK II has significant internal improvements with sound and memory. It feels much more professional and capable than its predecessor. An aftermarket upgrade was available by a company called Grey Matter and units with this upgrade are known as having an ‘E” upgrade. The modifications were done internally and the only sign that a DX7IIFD has an E upgrade is from a large sticker you could apply to the front panel. A DX7IIFD “E” will have certain special enhancements but this does not necessarily add more value from a collectability stand point.

The pitch and modulation wheels appear to be the only design element similar to those on the original DX7, but changed from brown to black. Everything else on the MKII was rethought and redesigned.

The DX7IIFD was Yamahas flagship model of the day and is definitely the pick over the S or IID variants in terms of function and collectability. It is not as iconic as the original DX7 but certainly superior in everyway and worth owning. It feels more eighties and pop like, whereas its brown predecessor looks out of the 70s disco era.

If you are patient, able to hunt vigilantly and willing to pay more, you will land yourself a mint DX7IIFD that will continue to appreciate.

The original accessories are also becoming sought after, and anything your DX7IIFD comes with is a bonus as most sellers won’t mark up their price significantly for included accessories. All the accessories combined can easily cost more than the keyboard itself when purchased independently.

We highly recommend securing yourself an original Yamaha case. A factory case not only protects but really compliments the synth nicely. As cases were intended to get damaged from transport most people opted for cheaper aftermarket cases and this explains the scarcity of genuine original Yamaha cases. For the original DX7IIFD we know of 3 variants according to the sales literature. There is a black canvas like one, a hard case and a flight case. The hard case is quite beautifully crafted with a textured Vinyl body and the metal trimming has a dark tint to it.

The texture on the hard cases is unique and slightly soft to touch.

The flight case is the most rare of the cases for the DX7Mk II synthesizers. While it looks similar to the more common hard case, it has a number of notable differences. The texture on the body is smoother and harder, similar to that on the earlier DX1 and DX5 models. The handle and latches are also more heavy duty.

The factory soft case was a cheaper alternative but offered little protection, especially from the shorter sides that had no additional padding.

Similarly to the Mach 1 DX7, the flagship Shibuya store had an exclusive blue hard case to accompany the DX7IIFD. We have only seen this one so it seems to be a very rare limited production run.

The original manual is in the standard Aqua (similar to Tiffany’s) which Yamaha was using for all their manuals at that time. It is impressively thick and one of the thickest single manuals to date for a Yamaha synth. The original brochure was a slight departure from the usual with a more flat/matt paper/print. It’s not as nice as common glossy paper and Yamaha must have agreed which is why they’ve never made another brochure out of the same paper stock.

The ADP-1 cartridge adapter allows you to transport and play sounds from the original DX7 to the Mk II but we think it’s a little void given the Mk II has its own improved sounds.

The DX7IIFD was also Yamahas very first synthesizer to incorporate a Floppy Disk drive which was a huge advantage with sound storage. The disk drive was also one large advantage it had over rival competitors at the time that were still using cartridge technology.

The RAM 5 cartridge was essentially a RAM 4 Cartridge with four times the memory. It was expensive and today a very rare accessory.

Identical in size to the RAM 4 seen in the background.

The music stand is identical to the original DX7 but now in black plastic to match.

As an evolution/improvement over the original, the MK II is very successful. All the changes and upgrades are logical and well thought through. Its solid industrial looks make it stand out amongst other synths of the day and even those that have followed till present day. It was very much a result of form following function. Even those groove lines could be seen as having a purpose by defining rail tracks for the buttons and graphics. There is something very pure about this synthesizer that we appreciate.

The Mk II existed in a time when Yamaha faced fierce competition from Roland’s D-50 and Korg’s M1. Those rivals introduced ROM samples and effects processors. The M1 even had an onboard sequencer. The age of the workstation had arrived and the MK II felt a little basic and outdated by comparison. It survived mainly due to a loyal DX fan base so Yamaha was desperate to try and follow up with the next big thing.

The synthesizer in this review is from the Wolf private collection. Purchased new in 1988 from Tom Lee music in Hong Kong it then travelled to Thailand in an original flight case. It was used often in the day by Taras Wolf to construct original sounds and compose songs. It was played live in his High school “Battle of the Bands” and holds many fond memories. Well loved and cared for, it remains to this day in near mint condition.

A promotional jacket that was only available to Yamaha Staff.

The E! upgrade Kit for the DX7II FD/D came in this White box with 80’s style graphics.

The contents of the box.

3 Manuals that cam in the Kit.

Above- Taras and Best friend Louis composing together in 1989 in preparation for an upcoming concert. Note the rare and unique Yamaha poster on the wall titled Centennial city which features the Centennial DX7. Please make contact if anyone out there has this poster or knows where one can be found.