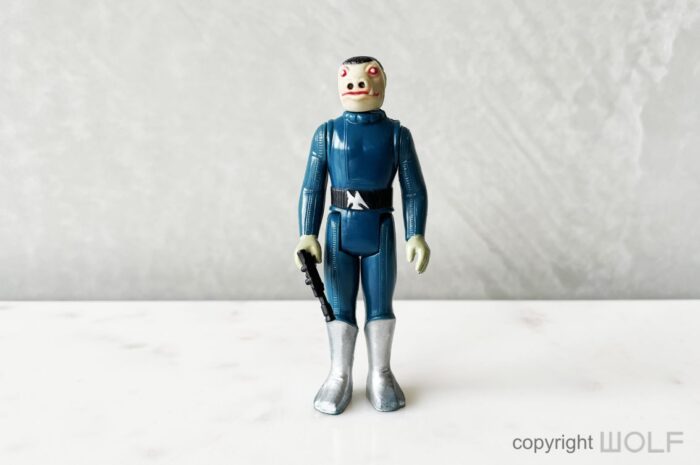 With so many for sale at any one time, is he really that rare?

Interesting and factual information may be provided, but our review aims to deliver insight from the perspective of WOLF Architects minds and eyes.

A holy grail in a smart blue suit.

The blue Snaggletooth was released by toy producer Kenner in 1978. It was a part of the Sears “Star Wars Cantina Adventure Set”, and also available as a Sears exclusive mail-in two pack with Greedo.

Kenner created this action figure from black and white photos of the character. It was not until the movies release that they realised how different the real character was. They quickly discontinued the blue figure and replaced him with a shorter red version with bare feet and hands. As such the blue Snaggletooth action figures are considered very rare.

The corrected red Snaggletooth that continued to be produced during each movie in the original trilogy.

There are two variants of the blue snaggletooth. One with a dint on his big right toe, and one without. The one without is also slightly shorter in height. From our research we can’t see any difference in price or preferences between the ones with dint and no dint on toe.

The adventure playset was where most blue Snaggletooth figures originated from. They are worth a lot of money even though they mostly consist of cardboard. The playset itself is just a simple cardboard stage set. The base piece has holes for rubber pegs that attach to holes under the action figures feet.

This is the mail-in exclusive with Snaggletooth and Greedo, originally available for only $4US!

While the blue Snaggletooth is considered rare, he is generally always available on the second-hand market. At the time of this review there were over a dozen loose figures for sale on eBay with values ranging from $400 to $800 depending on the condition. Many tend to discolour at the torso and the paint on the silver boots tend to ware easily.

Figures mint in baggie are even rarer and can be up to $1000. It could be better value to buy one that comes with a boxed playset, but those sets also vary greatly in price.

Considered a Holy grail in action figures there have been reproduction blue snaggletooth figures produced since the 1990s, though most were fairly crude. Recently however a near exact replica is available by Stan Solo. Reproduction figures can be controversial but to avoid the effects of aging with prized figures, a good reproduction can be a good way to showcase or display a rare figure, allowing you to keep your genuine figure in safe storage.

Quality Stan Solo replica figures are distinguished by the letters SLC on the rear of the left boot.

Every serious Star Wars collector will have a blue Snaggletooth in their collection. He’s an action figure with a unique story to his existence. Expect to pay up to $500 for one in good shape. For a dead mint specimen you’d need to find one in baggie but unless you plan to remove it from the bag (and devalue it), a baggie figure does not generally display very well.