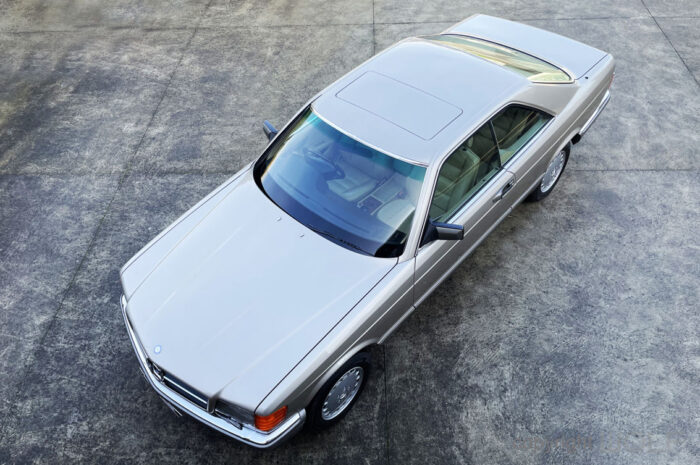 King of the road in the 1980s, this is King can still lead and now is the time to find a good one.

Mercedes are well known for timeless designs but this coupe could be the most timeless of them all.

A Retro Review looks at products that are at least over ten years old from a present-day WOLF design and craftsmanship perspective. While the technology and fashion of an era influence design, and are taken into consideration, great design ideas will transcend their eras to be timeless.

Interesting and factual information may be provided, but our review aims to deliver insight into the eyes and mind of designers.

The classic that refuses to look old?

The 560SEC cost over $200,000 in Australia when new. That was significantly more than the average suburban house. Not so long ago these cars could be found for a tenth of their original asking price. Recently the prices have started to rise rapidly and today you might expect to pay over $100,000 for a really clean example.

The 126 generation of Mercedes cars is so far the most successful with longest production for Mercedes S-class. The Mercedes 126 design was led by chief designer Bruno Sacco. The coupes were available from 1981 to 1991. The 560 models began in 1985 as part of the second or face-lifted release.

So much has been written about the 126 Mercedes cars that it’s hard to look at this car without preconceived ideas. Fortunately, we recall this car when new in 1981, and recall how fascinating and impressive it was back then. Today it looks like an old without being dated, which perhaps is another way for saying that it has aged extremely well. By today’s standards it’s certainly very straight and maybe even boxy, but at the same time there is softness to its strong lines, as well as a certain sportiness.

Coupes always live in the shadows of their convertible counterparts but unlike the W107 and W111 cars that went before, the 560SEC had no convertible equivalent. It reigned as a Coupe King and was Mercedes top dog when it came to sports cars. By today’s standards it’s not a big car, but back in the day it was rather mighty. With all its windows lowered it was a pillarless coupe, and an elegant sight to behold.

The W126 sedan was already an amazing advancement in design, but with C126 as a coupe was able be even more futuristic (for 1981 of course). The metal panels fold and connect to one another so that all surfaces feel continuous. The detailing is exceptional with an emphasis on looking flush and seamless. We particularly take note of how the glass windows feel seamlessly integrated into the frames. The rear C pillars a striking and aerodynamic in shape. This is a solid and complete looking car which in it’s day that felt svelte and sophisticated at the same time.

It’s definitely a masculine car with its confident long lines that often extend uninterrupted from front to rear. One of the more distinguishing external design treatments is in the front lower spoiler that extends as wide boards down the sides and to the rear bumper. Nick named as “Sacco boards”, they replace the original idea of protective door and side rubber bumpers. Unless in perfect condition these boards and bumpers tend to look a bit plasticky but in the day was a very modern idea.

Internally the 560 is very luxurious without at all feeling opulent like you might in a Rolls Royce. Most lines are still rather straight but start and finish with a subtle curve. The dashboard is mix of vinyl, wood veneers and black switches and controllers. There is a lot of wood veneer which for the first time extends beyond the dash and around the door handles. Although extensive it remains tasteful and not over-powering.

Beyond the dashboard and centre console, the interior is plush with Mercedes finest leather upholstery. The head rests were segmented into three sections for a more ornate and sculptural look. That would have been a significant amount of labour and a first for Mercedes. Even the doors had genuine leather panels that were patterned in diagonal bands to add a sense of sportiness.

The car in this review is optioned with a wooden steering wheel which further adds to the luxuriousness of the interior.

Diagonal leather bands are a subtle reminder that this is still a sports car and able to go fast!

There’s a lot of quality leather throughout.

Wood veneer was generous and tasteful.

The exterior is extremely well assembled, with all joints perfectly even, neat and relatively tight. The heavy doors close with very satisfying “Thunks”, something Mercedes had become well renown for. The anodized trimmings around the windows seem more durable than on past cars but being aluminium, they can still damage easily. While the Sacco boards were a bold design element and made from quality plastics, they feel hollow when tapped and don’t (in our opinion) live up to the quality you’d expect for a car that was worth as much as a house.

Internally everything looks a neatly finished and feels firm to touch or press. The leather seats are plush with stitching and joinery that was second to none. Testimony to its quality, the leather in the car under this review is completely original and un-restored. Even after 30 years with over 130,000 km on the clock, it still looks and feels like new. The wood veneer is thin so after 3 decades most would require some attention. The wood in this car is a little faded from exposure to sunlight.

Even the gear knob is crafted in style with genuine Leather.

The 560SEC rivalled all luxurious cars of its day including Rolls Royce, and many argued that it was the best of the best. It was considered quiet, smooth and with its V8 Engine also fast. It’s not expected to be a sports car like a Porsche or Ferrari, but it’s also not stuck up or stiff. This is a car for comfort and sophistication without feeling like you have to dress up too smart.

Everything was top of the line and represented the best technologies Mercedes had at the time. The seatbelts offered itself to you with an extendable arm, almost like a robot. The seats were electric, and even the Radio could play CDs, extremely novel at that time. The car in this review was even optioned with an electric rear windscreen blind. Heated seats were another a option for added comfort

The lower portions of the dashboard and doors are lined with carpet material that matched the floors, and this adds to the plushness and acoustics of the interior.

For a coupe the rear is very spacious, especially as Mercedes chose to limit accommodation to two when there is actually space for three.

The seats and even the headrests were electric with memory!

The original Becker radio with single CD slot in the front was huge in the 80’s. Finding a working one today is rare and will cost a few thousand dollars.

A ribbed design on the indicator lenses was a self-cleaning innovation that Mercedes then had across their entire range.

The external A-pillars were cleverly designed to drain rain water away for improved visibility through the side windows.

Even the steering wheels position could be adjusted electronically

The cars original price tag made it one that only the wealthiest considered and owned. If you imagine a rich person being chauffeur driven during working days, this was the car they drove by themselves on weekends. This is less obvious now because its understated looks present the car today as just a nice old Mercedes. The average person will find it hard to believe that this car was once worth the same as one, two or three houses!

Interestingly these cars depreciated immensely over the ensuing decades and C126 coupes changed hands for a fraction of their original value. Unfortunately, most second and third owners underestimated the high costs of maintenance so many SEC cars were trashed or abandoned.

Only recently have people started to recognise the true value of these cars. The top of the range 560SEC is the one everyone wants and will often have the most options. Collectors are catching on that good examples are very scarce. Who wouldn’t want to own one of Mercedes best engineered and designed cars that was only affordable to millionaires? Mint original low mileage examples don’t really exist. Most buyers have to settle for well cared for examples that they might take to the next level with further investment. Such cars can still command up to $100,000 Aust. Expect to pay even more for an Australian delivered car with full history that is mechanically perfect and without rust.

A classic that refuses to look old.

When we think of a classic car, we often imagine a rather shapely vehicle with lots of chrome, wood and leather. This is car refuses to fit that mold which makes it a classic that is not classical. Its lines are so straight and smooth that it can still pass today as a modern car. It’s a very luxurious and elegant car that refuses to be showy, yet anyone with a decent eye will be impressed at its design and detailing. We like the idea of driving a millionaire’s car without feeling arrogant or portentous.

Bargains can still be found, because the values of trashed examples or smaller engines variants often cloud the value of good ones. However, will have to be quick because the 560 models in particular are being snapped up by collectors Worldwide.

The factory sales brochures featured the same smoked coloured coupe as was in this review.