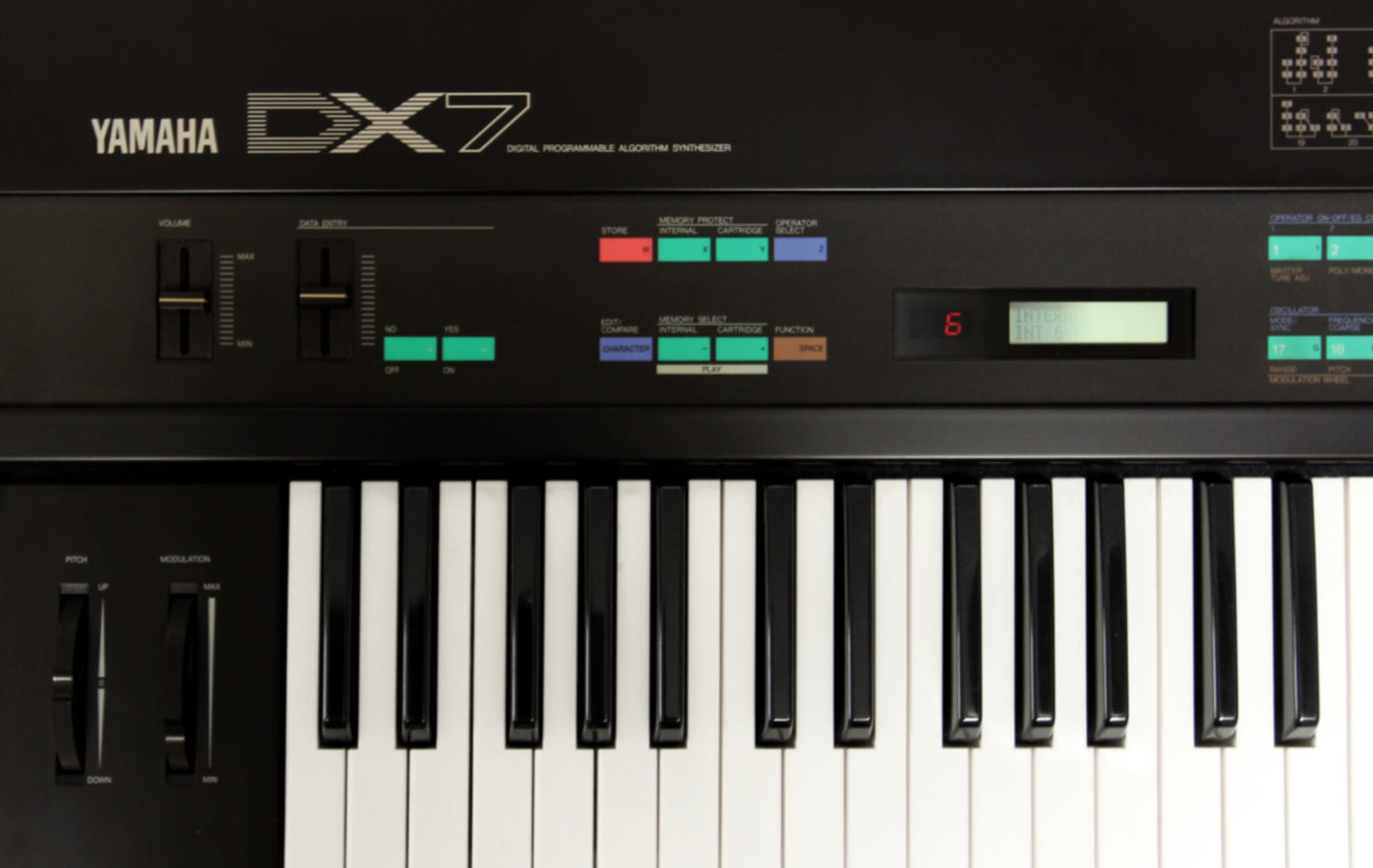 The best selling Synthesizer of all time!

The Yamaha DX7 was one of the first commercially affordable digital synthesizers. With its FM sound engine, it revolutionized music worldwide. Used by most famous bands in the 1980s it is iconic, famous among musical instruments and remains one of the bestselling synthesizers of all time.

With over 200,000 units produced there is almost always a DX7 for sale if you need one. When new they cost approx. $2500 Aust. An average one today that functions perfectly but with signs of ware will start at $500. Mint examples are quite scarce given that they are approximately 35 years old and can cost up to $800. We would expect to pay $1000+ for a mint example that comes complete with accessories such as original case, manuals, pedals and sound cartridges.

The DX7 was designed by Yasuhiro Kira and together with the DX1 and DX9 was one of 3 models launched at roughly the same time. The mighty DX1, is an impressively massive machine with the power equivalent to two DX7 units. The DX9 was a cheaper and inferior model which almost looks identical to the DX7 externally. So successful was the DX7 that the line was extended by 4 successive models, the DX7S, DX7IID, DX7IIFD, and finally very rare DX7C (Centennial edition).

Our first impression was that the brown looks dated and dull. Even for 1983 we would suggest black, grey or even white as better colour options. Brown was very much a 70s colour and did not lend itself to a machine intended to usher in the digital age of synthesizers. The flush panel of green buttons and small LCD are unique to this model and would have instantly set the DX7 apart from its competition. Being able to read the name of a sound as opposed to just reading it by a number was a big deal in 1983

All that “brownness” actually looks better today than in the 1980s. Its retro feel adds to what is now a clear classic. The most striking feature is the flat membrane with buttons that were an intentional reversal of the usual knobs, switches and levers found on analogue synthesizers. For someone who’s not old enough to experience the 80s these buttons are quite novel. Together with an LCD screen (innovative in the day) it certainly looked digital and stood out from the competition. The graphics are of a high-quality print and the bright colours look good.

Despite the layout and design being rather minimal this synthesizer lacks a certain sleekness. The flat membrane panel does not harmonize with the rest of the body that is almost clunky in its squareness. With a visible difference of 1-2mm where one body panel joins another, there is a lack of visual tightness which make the DX7 seem a little bulky in its assembly. The 4 visible screws on the front panel together with the visible hinges on the rear panel make maintenance obvious, but looks too industrial for our liking.

The body is robust and composed of industrial quality steel face plates and rigid plastic end panels. It was designed to survive studios and concerts and there are many beat up looking DX7’s still in use today. The membrane panel is the weakest part of the construction and you can tell how much use a DX7 has had by the quality of this panel. Most will have rips, and ripples where buttons have been pressed millions of times. The keys themselves are very well built and feel as good if not better than many modern-day models. At 14.2kg it may have weighed less than many of its analogue contemporaries but it’s not light and the end pieces tend to get knocked around in transport. While they are of an excellent quality plastic there might have been a better alternative considering its weight.

We won’t comment on the sounds and internal systems as this machine was responsible for many of our favourite 80s hits. The DX7 has nothing to prove and we are grateful to its creation. To the unfamiliar however, the DX7 will be difficult to use.Unlike analogue machines, the controls are uninviting and mysterious. The screen is small and without back-light, so you don’t really bother to read what it says. While the flush buttons were quite futuristic in its day they don’t feel natural and there is a tendency to over press them. It’s not surprising that Yamaha never used this technology again on other products. We said we wouldn’t comment on the sound but hearing those classic 80s sounds will bring a smile to your face.

The DX7 is undeniably a classic and important part piece of music history. Unlike a collectible watch or a pen however, a synthesizer is not small and you would need space if you wanted one. We don’t think you need to be a musician to own one but it’s probably not the most attractive or interesting thing you could put on display in your home for the sake of its meaning or value.

For a synthesizer collector (and they do exist) the DX7 is a must have, and now is the time to secure the last remaining good examples. If you are patient, able to hunt vigilantly and willing to pay more than you expect, you will land yourself a mint DX7 that will continue to appreciate.

The original accessories are also becoming sought after, and anything your DX7 comes with is often a bonus as most sellers don’t always mark up their prices significantly for included accessories. Many accessories combined can easily cost more than the keyboard itself when purchased independently.

(Left) The DX7 was a milestone and Yamaha even made a promotional poster to spell that out.

(Right) Two brochures that were readily available in the day. One illustrated the DX line and included the legendary DX1. The other focuses purely on the Dx7. Both brochures in good condition are highly sought after and collectible.

We highly recommend securing yourself an original Yamaha case. A factory case not only protects but really compliments the DX7 nicely. As cases were intended to get damaged from transport most people opted for cheaper aftermarket cases and this explains the scarcity of genuine original Yamaha cases. For the original DX7 they exist in 4 variants with the most common being a brown semi-hard vinyl case. Then there are the bright blue and dark blue hard cases. We prefer the bright blue cases which have a more textured fiberglass exterior. In our opinion they look more substantial and true to the period. The Dark blue cases have a different handles and have a smoother exterior. They are also shorter in length and are harder to come by in general. We believe that these were either only available in Japan or a very late production change. From our research we found two variants of the dark blue case. One has “Yamaha DX” in the bottom right corner, similar to the bright blue case but slightly smaller. The other variant is was exclusive to the Shibuya music store in Tokyo which is Yamaha’s flagship store in Japan. This case is identical to the former but dropped the “DX” and instead has “Yamaha Shibuya music store +phone number” underneath the name YAMAHA logo.

A final variant is a silver padded soft bag but we cannot confirm if this was official YAMAHA or aftermarket. We could not find on any of the original sales literature that featured it.

The semi-hard Vinyl case (LC-7S), was a good compromise between weight and protection with a retro design look that matched the DX7 & DX9. At less than half the price of the Factory Hard-case, it was popular and easy to find.

Textured Fiberglass surface is retro but also a little creepy.

The silver soft case is hard to find in good condition and may have been an aftermarket product.

Data RAM cartridges were a neat way to store and transfer additional DX7 sounds. There was also a music stand that connects to the synth via two holes on the rear panel. These were rarely used and are often missing.

There were at least two different variations to the original instruction manuals, one in landscape layout with  an algorithm graphic on the cover. The other had a plain simple design

Japanese manual was green and came with a few other literature. 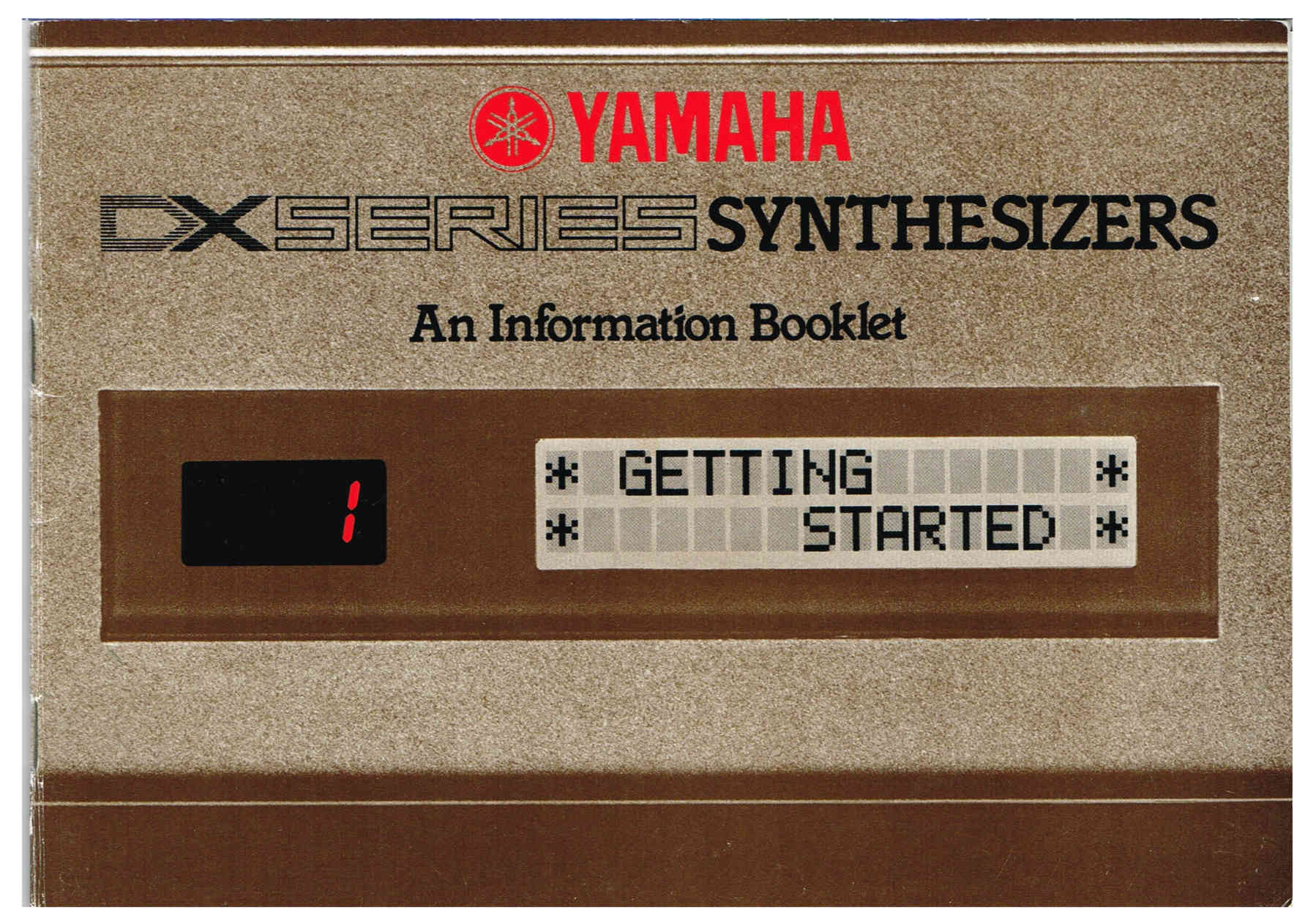 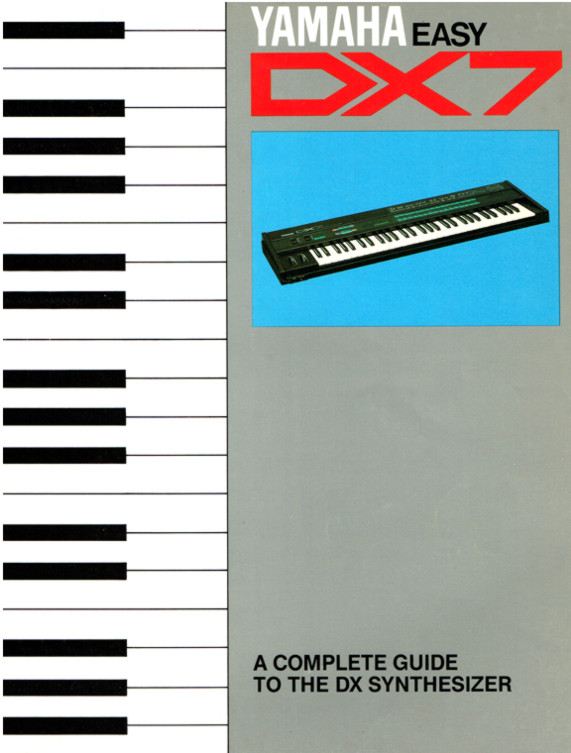 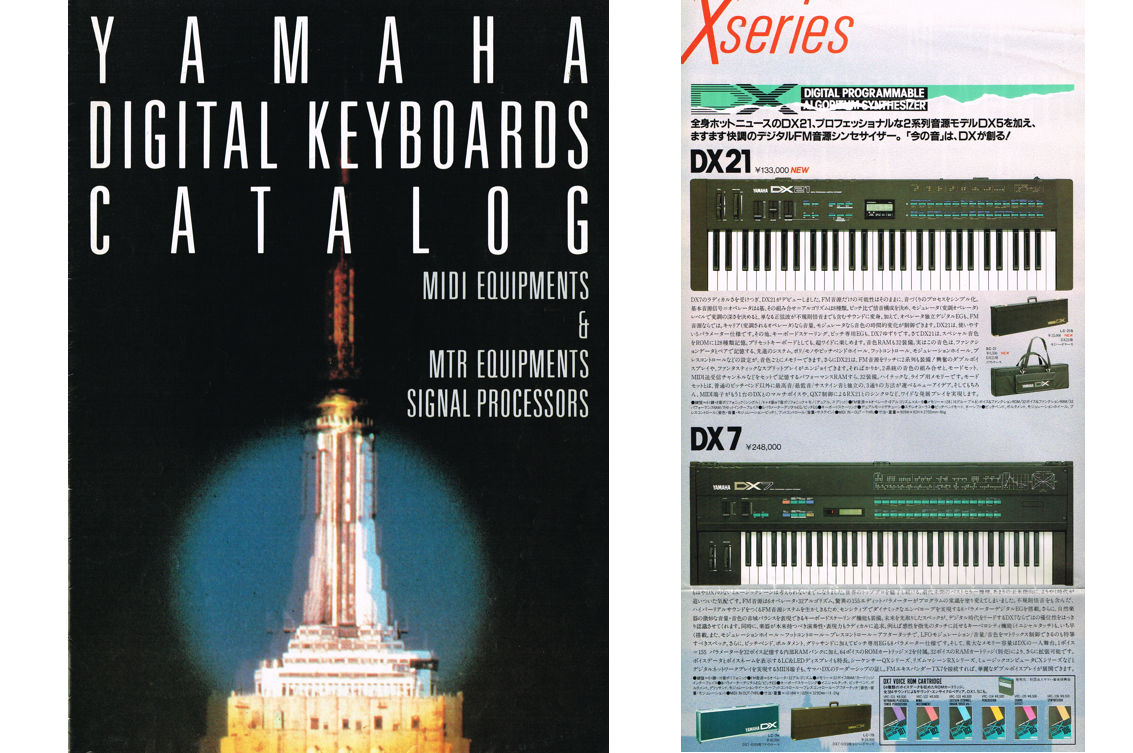 This Japanese 1985 fold-open catalog features the DX7 below the newly released DX21 Synth. This is one of the few catalogs that feature the Hard blue and semi hard brown cases together.

Some DX7’s still survive with their original boxes which are nice to have if in good shape.

An aftermarket upgrade was available by a company called Grey Matter Response and units with this upgrade are known as having an ‘E” upgrade. The modifications were done internally and the only sign that a DX7 has an E upgrade is from a large sticker you could apply to the front panel. A DX7E will have certain special enhancements but this does not necessarily add more value from a collectible stand point.

The original DX7 box, as with many related Yamaha gear of the era had these continuous bands of Purple rectangles.

Yamaha also released demonstration and instructional tapes as well as well as an introductory video for the DX series. 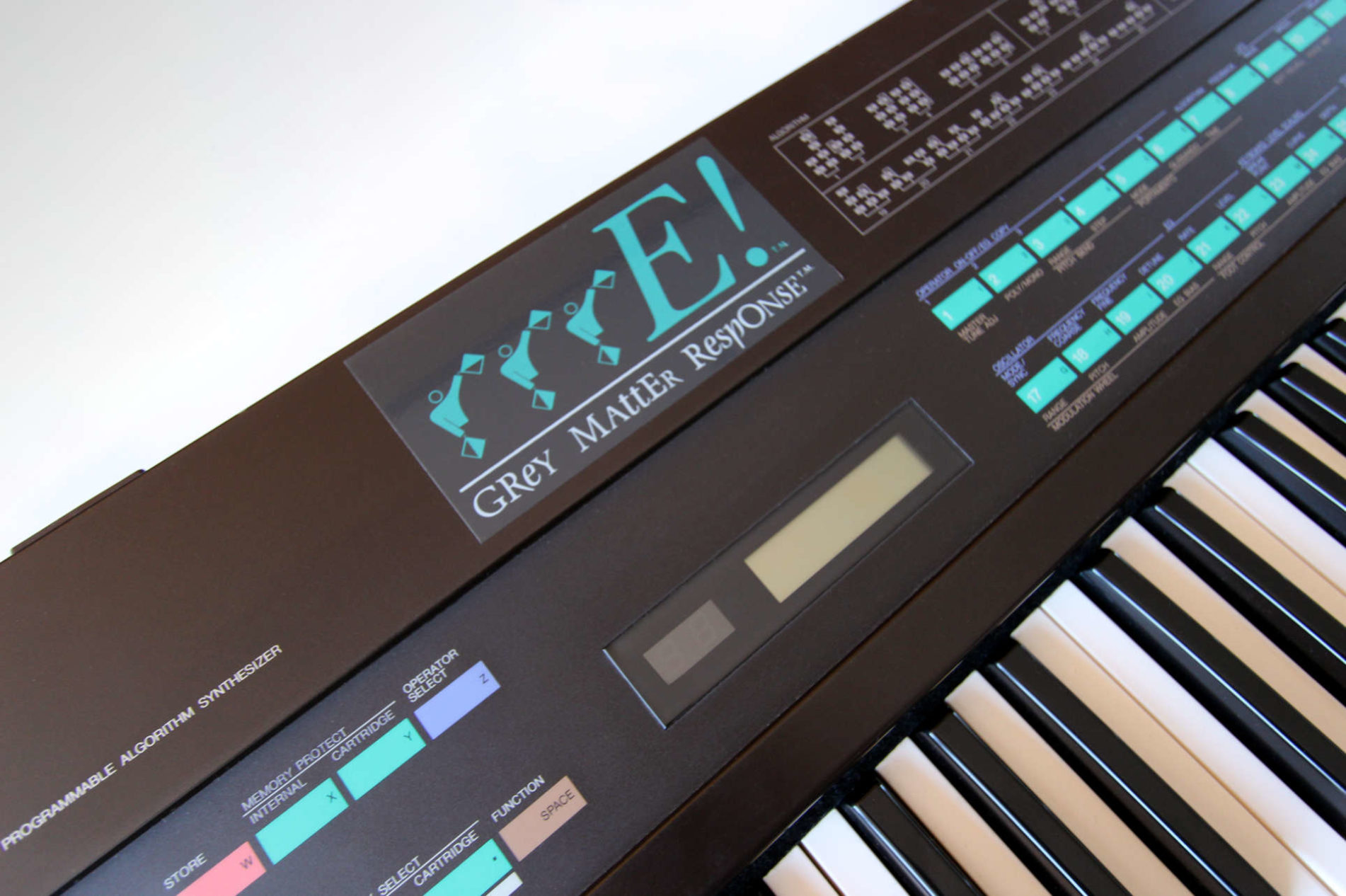 A Sticker to show the upgrade was also available. 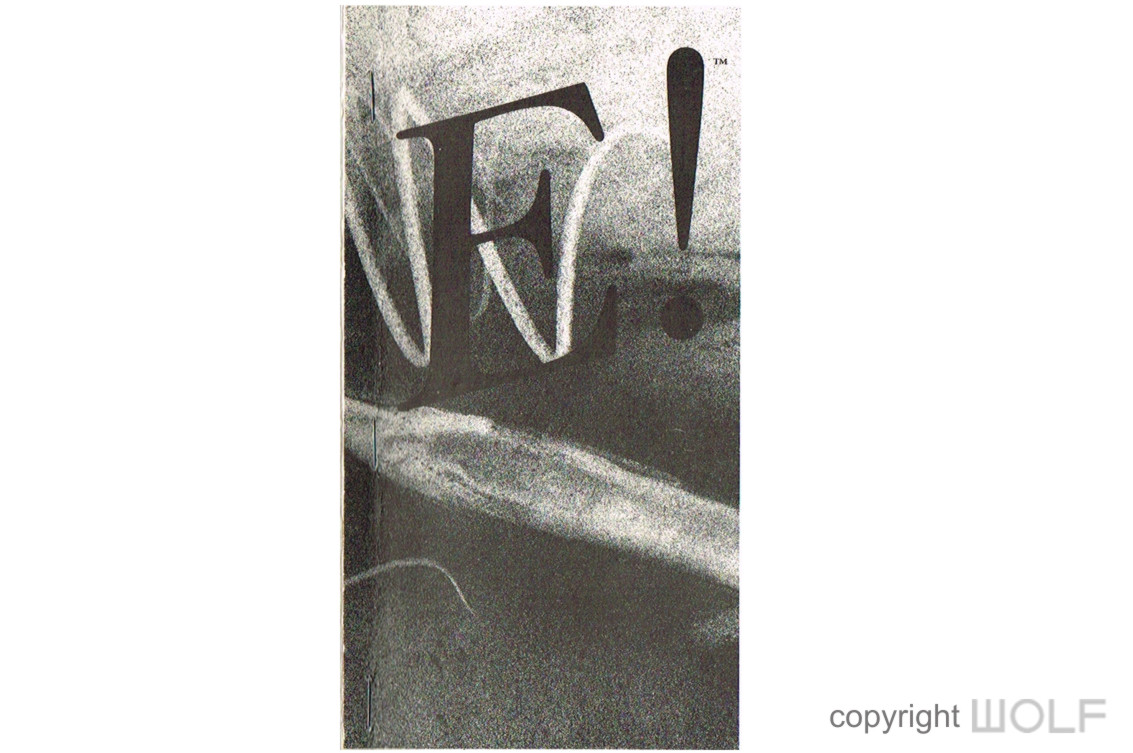 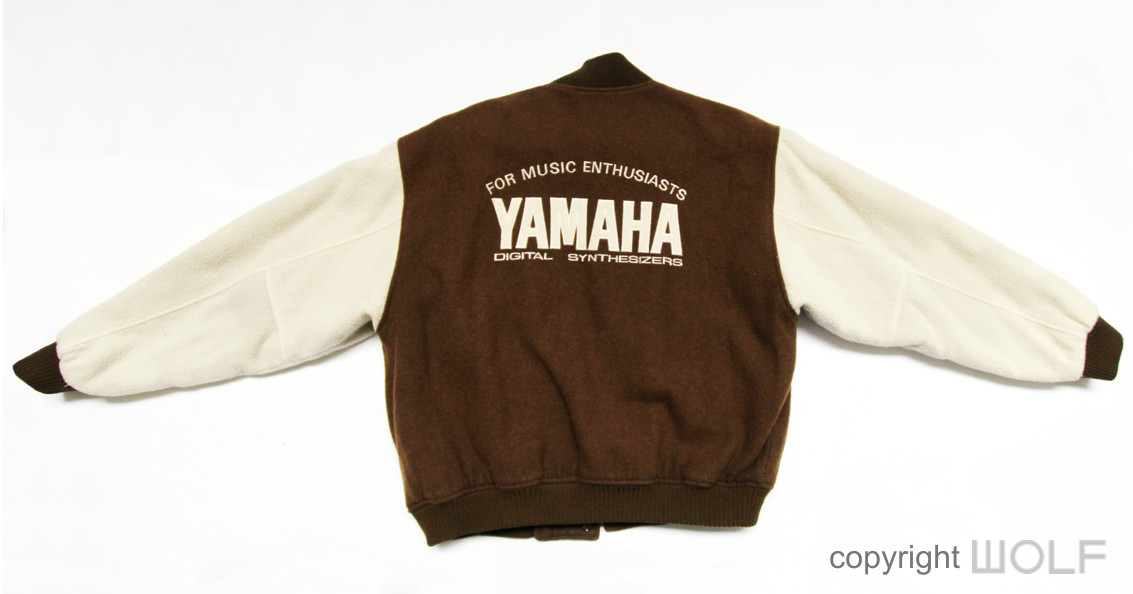 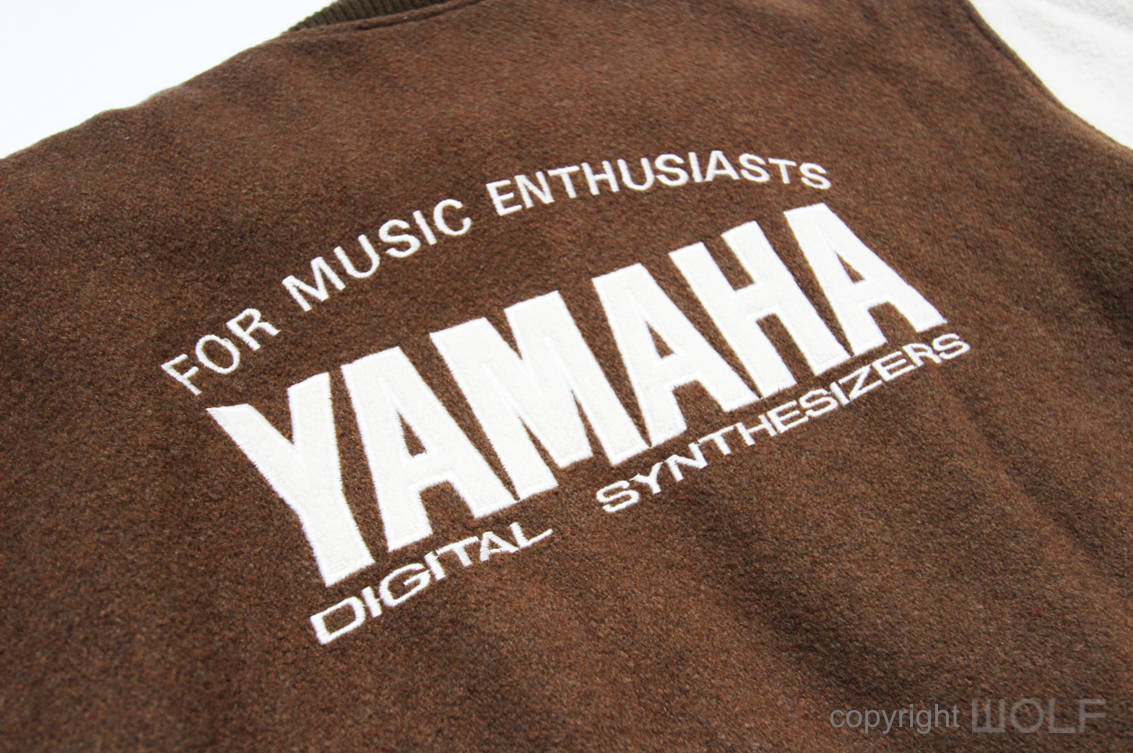 A promotional Jacket in brown to match the DX line. 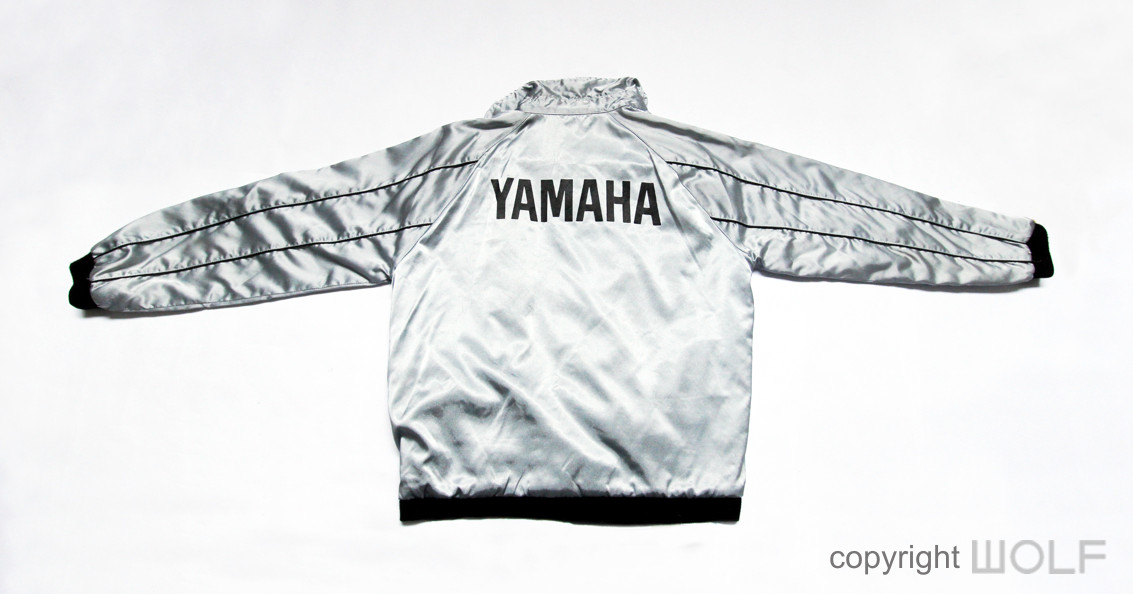 Not sure if this Jacket was official YAMAHA or if it was a separate fan club issue?

When we look at the DX7 from a design perspective there are so many things we would like to improve that prevents us from using the word “beautiful”. It’s not beautiful in our opinion but fortunately good design does not have to be beautiful.The DX7 represents a milestone in music technology and we can forgive it for looking more like a prototype than a refined finished product.

While that perspective may seem harsh we think the design team at Yamaha would have agreed since the successor models addressed nearly all of our criticisms. Brown has never been used on another synthesizer that we are aware of (including other non-Yamaha brands). The membrane switches gave way to more conventional style buttons and even the concept of making the internals easy to access was rethought to remove all visible screws and hinges. Yamaha built their machines so well anyways that most of the time they only needed a battery replacement every few years.