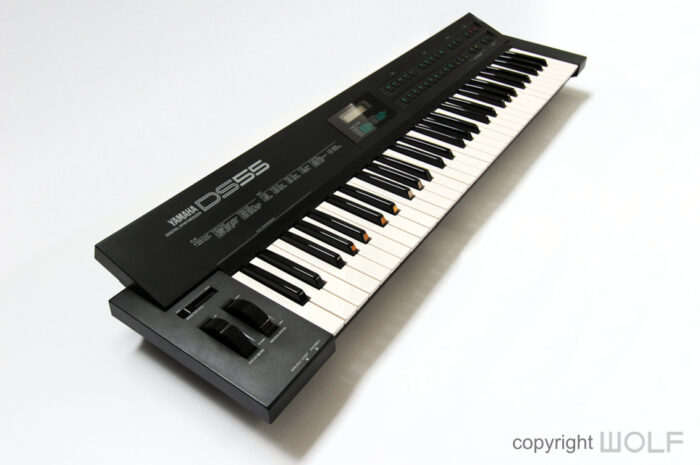 The Yamaha DS-55 was introduced in 1988 as a low cost and affordable entry synthesizer. It was intended as a link between their home keyboards and their professional range. As a 4-operator FM synthesizer it’s very much a more conservatively packaged YS100.

At 84,000 yen when new, they were possibly one of Yamaha cheapest ever synthesizers. While affordable, they were not popular since Yamaha already had quite a few 4-operator FM synths available including the DX100, DX11, B200, YS200/100. As such they are relatively hard to find, but when they do come up for sale can usually be grabbed for a bargain.

Why Yamaha needed the DS55 is uncertain, but in Japan they were sold as the EOS DS55.

How low can you go?

The DS55 is simple, clear and relatively sleek in our eyes. It is almost as simple as it can get and could almost be described as a genuine example of form following function.

The DS55 is made of a durable black plastic that has a similar texture as seen on the DX7IID/FD. We note that this texture is important to giving the DS55 some sense of quality as without, it would feel rather cheap.

Conceptually the design consists of a long rectangular bar placed at an angle to the keyboard. At the center is an LCD screen. The small screen size gives the DS55 away as a budget instrument, particularly when you consider that everything else around had a screen that was at least double its size. To the left of the screen are printed text graphics, and to the right are two neat rows of square shaped buttons.

Running the length of the keyboard, just above the keys are a series of groove lines. These are a nod to the DX11 and is the only decorative feature on the instrument. Interestingly Korg’s M1 is the only other synthesizer we know with the same decorative groove lines.

The DS55 is lightweight for portability, and it feels like the Portatone home keyboards. The black textured plastic casing is however quite durable and presents this synth at a slight cut above the amateur range. As a budget instrument Yamaha did implement certain cost saving measures. We note that the keys are different from Yamahas higher end instruments. Many DS55 keys have aged with more yellow than average and their thinner plastics often have chips in them.

The buttons themselves don’t feel nice to press and tend to get stuck. We found this particularly annoying and surprising as Yamaha normally have great feeling buttons.

The screen is behind an acrylic panel that protrudes from the surface. It’s a detail that is similar to that on the DX11, but seems a little basic for time when screens were becoming more flush with the panel surface.

The DS55 was designed to be as simple as possible with very clear and well-spaced buttons. These are placed along two rows, each on a tiered step. This was a clever and elegant detail in our opinion. Although the buttons don’t feel nice to press, we like their prefeclyt square shape. It’s interesting to note that the buttons have the same texture as the body, which was probably a cost saving measure and also the first Yamaha synth that does not have a different button texture.

The screen could have been bigger, but we respect it as a cost saving measure – perhaps left over DX11 parts? The DS55 is also unique in that the volume position is just above the controller wheels and runs left/right, rather than the usual up/down.

The tilt up panel looks like it should be adjustable but is obviously fixed, and we think it does form a good visual and functional balance.

The DS55 volume slider was like a scaled down version of those on the DX11 and placed horizontally.

We don’t know why Yamaha thought the DS55 was necessary but they must have seen a market for them. While rare to find mint examples, these are not collectible and unless you come across one at a real bargain, it probably will be a waste of space and time. Expect to pay up to $400 for a mint example, but in most cases, people are willing to let them go for under $100.

The DS55 is the lowly baby of Yamaha FM synths and many wont even know of its existence. There is nothing particularly special about it and as time goes on it will continue to be lost and forgotten. Despite this we respect its design as a simple, understated instrument designed to be easy and affordable. We remember it when it first debut, and have to admit that the design was nice in 1988.