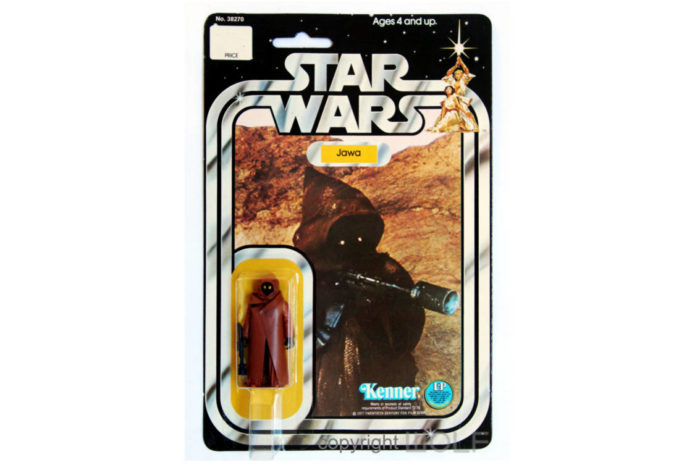 The most famous Holy Grail in the Star Wars toy universe.

Jawa’s are scavengers that featured first in Star Wars episode IV- “A New Hope” (1977). As an action figure he was significantly smaller than most but sold for the same price. Seen as having less value he was unpopular, so Kenner (the manufacturer), revised his vinyl cape into a real cloth one. As such the vinyl capes had a short production run and remain extremely rare.

The vinyl caped Jawa exists in two variations- the standard Kenner version with a lighter coloured brown cape, and then there is the Toltoys version with a more reddish cape. Both can fetch over $1500US for mint specimens. Mint on card versions can reach several thousand dollars and beyond.

Toltoys was an Australian company that held the license for Star Wars toys in 1977. For some unknown reason the cape on the Toltoys Jawa’s looks near identical to those on the Obi-wan Kenobi figures and many people have tried to make fake Vinyl Caped Jawa’s out of Obi-wan capes. On card the Toltoys Vinyl caped Jawa is significantly rarer than the Kenner versions and at the time of this review we were unable to sight one anywhere online.

Known as the 12 Back because the cards backing showcased the 12 figures for sale at the time.

The graphic design on this 1977 card with a double chrome striped border and Bold logo at the top is now iconic and classic. However, it was also just beautiful and that explains why contemporary Star Wars toys have reverted back to this design in modern day packaging.

The figure is small and more cute than cool. The vinyl cape itself is unrepresentative of the character and the change to real cloth was a big improvement. The cards on both the cloth and vinyl capes are identical but the bubble on the cloth cape was larger.

The bubbles had a unique extension towards the bottom of the card which we think was intended to enable the card to stand upright.

The change to cloth cape (on the right), improved realism and sales.

As with most Star Wars figures of the era the plastic is durable and figures that were not played hard tend to survive well. His limbs however can discolour and turn into a greenish tone. This phenomenon was common to other figures in the range with brown plastics. With the Jawa’s they seems to be more prevalent on the Toltoys variants. Many collectors will insist that it’s not a genuine Toltoys Jawa unless there is some decolouration of the limbs.

As figures are generally interchangeable with weapons and capes form other Jawa’s, it is hard to be certain that any particular Jawa is carrying the exact gun and cape that he left the factory with. The vinyl cape itself tends to suffer the most damage from tears around the arm holes.

Mottled plastic limbs seemed to be a natural aging effect.

Collectability and what to look for.

The days of finding one of these in a garage sale are probably long gone. Therefore, you will need spend a significant amount of money to own one. They seem to readily be available on eBay but always demanding very high prices (especially if it has been AFA graded). It’s possibly a bit over priced in our opinion as there are vintage Star Wars figures that are probably even rarer that go for a lot less.

Fake capes have been made since the early 1990s and continue to get better and better. There are ways to tell the difference but you should do your research and consult with experts before committing to plastic that is worth its weight in gold.

The Toltoys version is redder and appears slightly larger.

Worth its weight in Gold!

In the mid-90s they were already worth a few hundred dollars and that spun heads at the time. If you were lucky enough find one and held on to it, you have a sound investment. One on card will always sell but we doubt the appreciation potential of loose (out of package) figures. As mentioned previously there are more affordable and interesting figures that are just as rare. Be very careful of fakes and always purchase from a reputable source. Figures with damaged capes are worth significantly less.