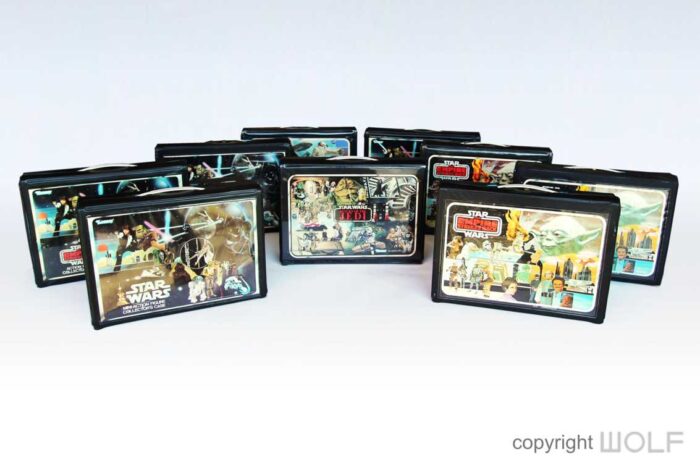 Making a case about cases. Their time has come.

The original Kenner Star Wars action figures were enormously successful, so it was natural for the toy manufacturer to capitalise on this with carrying cases. The very first carrying case had a simple  brief case look. This design continued with each movie in the original trilogy, evolving with different artworks, contents and colour variations. While Kenner did offer more creative carrying cases in other shapes and forms this article focuses only on the brief case style cases.

There are quite a few variants, we’ve identified at least nine!

Each case consists of two removable trays with individual compartments to hold 24 figures altogether. The reverse side of each tray has small pegs that help to serve as a display or play space for the action figures. When new these cases came with sticker name sheets to label the individual compartments. Included was also a company product line catalogue and a cardboard insert depicting the current action figure line. These cardboard inserts are hard to come by as they are often one of the first things to be discarded.

The Artwork on the cases make them special in our opinion. They are beautiful and created as a unique collages of action scenes from the relevant movies.

All cases had a simple white plastic handle and secured with a simple button clip.

The original Star Wars case came in two variations. The first and most popular case had the Kenner logo in the top left corner. The second version is known as the Canadian version with text in both English and French underneath the Star Wars logo. Replacing the Kenner logo in the top left corner are the numbers “No.39190”. The Canadian cases had chrome snap buttons and studs on the underside. The standard Kenner cases mostly have black snap buttons, but we have seen some with chrome buttons.

The Canadian variant is surprisingly hard to find in good condition

There were variations on the cardboard inserts. The very first ones are rare and had a prototype Boba Fett action figure that appears to not fit in his compartment very well due to the rocket on his back. Other small differences can be seen in the text on these cards.

The interior of the Star Wars cases had blue textured vinyl. The trays had a bluish grey colour tone.

The rear backside of all Star Wars cases also had this sticker, but these are often badly worn or completely missing.

The very first Empire cases were identical to the Star Wars cases but with the new movies Logo in the bottom left corner. This case is often referred to as the transitional or transition to Empire case, intended as a temporary measure until the all-new Empire Strikes back artwork was ready.

The transition case did come with an updated insert car. One side had Star Wars figures and the other side had Empire figures.

When the new Empire graphics finally arrived it sported a large image of Yoda on the top right corner, with the film logo moved to the top left corner. Internally the texture of the vinyl changed and was beige in colour. The trays remained the same in design but were also changed to beige.

The cardboard insert depicted figures from both movies and curiously one side had a blue background while the other had yellow.

The rear backside to Empire cases had this sticker, but these are often badly worn or completely missing.

The new beige interior also had a different texture

These cases seem to be the Canadian release for the Empire Strikes back. There are two different tray colours, black and dark grey ones. Further to the dark trays there are a few other notable differences.

The cover artwork is identical but is sealed differently at approximately 1cm set in from the edge. The texture of the case is also grainier and appears less shiny than the other cases. The snap button and studs also have a chromed finish as opposed to black paint.

For some reason Kenner decided to refresh their Empire cases with updated art work and the logo moved to the very center. This case is often referred to as the Wampa case because of the Wampa depicted on the top right side. The interior colour was bravely changed to red.

Return of the Jedi

The final vinyl case was the one released with the Return of the Jedi. It had new Return of the Jedi Artwork with logo in the center and continued with the red interior. A notable difference is that the sticker normally placed on the rear outside is now on the inside where it is better protected.

The vinyls used are relatively thin and while durable do tend to split at the seams. After many decades most will have tears and splits but mint closeted cases do exist and present as they did on day one. The structure of the cases are cardboard so once the vinyl comes apart the cases are subject to warping with heat and moisture. The snap clips tend to tear away from the vinyl and can often be missing altogether. The white handles can also come away and go astray.

The artwork is just a coloured A4 sized poster that is heat sealed in by a thin sheet of clear plastic around the perimeter. These can come away at the edges, exposing the artwork to moisture and dirt. Many of the clear plastic sheets suffer from yellowing and warping, so cases with clean flat ones rare and highly prized.

The trays themselves are quite hardy but those that have been exposed to UV do deteriorate and discolour. The pegs and edges can become brittle and break off.

The most common cases are the original Star Wars one from 1978, because every kid had to have one. Apart from the ones with prototype Boba Fett on the inserts, they are always available on the second-hand market. Canadian ones are rarer than standard ones. The transition case with Empire logo on Star Wars graphics is rare but not as interesting or desirable. The next most common cases are the Empire Strikes Back ones with big Yoda, followed by the ones with the Wampa. The Return of the Jedi cases are the rarest of the trilogy, possibly because there were so many Jedi figures that a case for only 24 figures seemed rather inadequate.

The rarest of all cases are the Canadian Empire ones with black or dark grey trays.

In regards to prices these cases start from as low as $20 for a beat-up example to well over $1000 for mint sealed ones. The price range is huge and related to which variation and condition. An important consideration is on how complete the case is. Does it have all trays, studs, handle and snap button intact? Does it still have the original inserts, Kenner catalogue and sticker sheets? Unapplied sticker sheets will up the value significantly and the sticker on the outside rear is a nice bonus.

Ideally the front of the case is flat without any warping or splits in the protective plastic cover, so that the artwork remains well preserved. Check on the joints and seams for tears and splits and expect to pay a lot more for ones that are in good order. Note that its extremely rare to find cases without some damage. Apart from mint sealed ones, almost every case we’ve seen has a split, tear or or pealing of some form in the vinyl. We think that’s just the nature of these and its a matter of finding ones with minimal ware as opposed to no ware at all.

For a long time, these cases were not considered collectable, and discarded as junk. Today there is a big surge of interest, especially if they come full of good original figures from the original owner. Finding a nice case filled with good figures can be thrilling. There are also practical considerations as these cases are still good for storage. The conundrum is in their limited storage capacity. Even though you can double up with two figures per compartment it’s still just a case for 24 figures. If you consider most full figures sets to average around one hundred figures, you need at least four cases. We therefore recommend collecting the original Star Wars case, two empire cases, and the Jedi Case to accommodate a full set. Add in the transition to Empire case if you need more storage for all those figure variations.