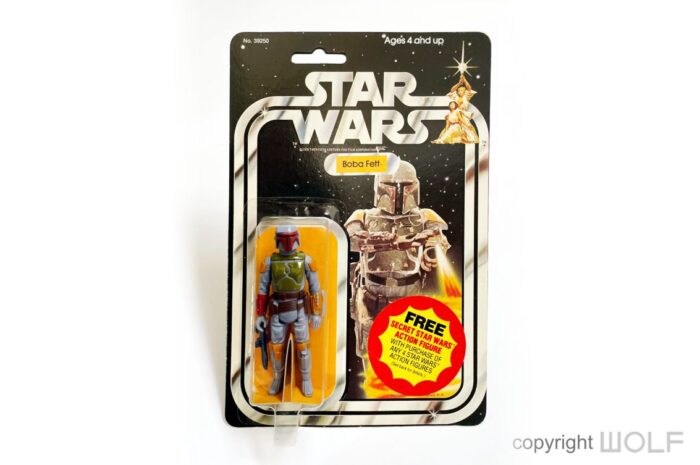 Mr Popular is worth his weight in gold, and continues to appreciate with new fans after the release of Disney’s “Book of Boba Fett”

Worth its weight in Gold?

One of the Galaxy’s most iconic characters is also one of the most desirable in the Vintage action figure universe. Boba Fett was first released as a mail away action figure. Officially he then appeared in 1979 in package on a Star Wars 21 back card (known as a 21 back because it depicted 21 action figures on the back of the card).

In the early days of collecting, a packaged item with any promotional sticker was considered less desirable than one without. Today there is little difference and in fact many collectors seek out unusual promotional labels or stickers. Sadly many Mint specimens are scared from collectors trying to remove labels or price tags and causing unnecessary damage. Some collectors now even consider original price labels to be an important part of the product history.

This specimen has a secret action figure promotional sticker

This specimen is has what collectors call a punched card, with a hole to hang on store displays. Some collectors prefer unpunched cards but are they really worth more?

This is a very rare and highly prized item amongst collectors. Therefore they don’t change hands very often. On an original Star Wars card, Boba Fett can be worth several thousand dollars provided the condition is excellent. The card should be flat and glossy without any noticeable creases, tears, or other surface marks. The bubble should also be reasonably clear without any breaks or major dint. Absolutely flawless specimens do exist and have been known to command well over $10,000US.

The last vintage Boba Fett was issued with the droids animates series in 1985. In 2010 he was recreated in celebration of his 30th birthday. This was a newly created figure to look like the original, however on close comparison the figure does have several significant differences. In 2019 he was released as the second wave of a retro collection series. This issue was more accurate to the original.

Beware of fakes and don’t get confused with the re-issues.