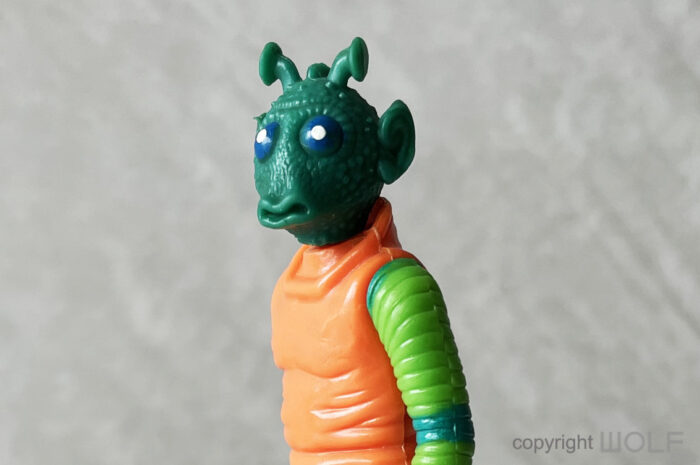 A retro review looks at products that are at least over ten years old from a present-day WOLF design perspective.

I exist therefore I am.

Greedo is a vintage Star Wars action figure from 1978.  His character was a bounty hunter working for Jabba the Hutt commissioned to capture Han Solo. He was killed in Episode 4 (A New Hope), by Han Solo in the Mos Eisley Cantina. His death has always been a controversial talking point among fans because “Han shot first!”

As an action figure Greedo has always been all green but the figure in this review has an orange vest that should belong to Walrus man. Is it a variation, custom job, or honest factory mistake? Factory errors are nothing new but this one is interesting because in the movie Greedo did have an orange vest. This action figure oddity is therefore more accurate to the real character than the correct action figure. In fact, it begs the question of why didn’t the manufacturers give Greedo this orange Torso instead of Walrus man?

Walrus mans vest should be Greedo’s?

Factory errors occur naturally as a result of human error. It’s possible that Walrus man and Greedo were alongside each other in the production line and parts were accidentally swapped. But to have all limbs so consistently swapped to a vest that is more in keeping with the movie character does seem a bit suspicious.  This could indeed be a home-made job and upon close inspection he does have very fine hairline cracks around the joint. Then again that could also be a result of vintage battle action.

This figure entered the WOLF Collection in the mid-1990s, before the days of reproductions and YouTube teaching us how to swap body parts. Interestingly it went relatively unnoticed for some time, as the orange vest naturally looked at home on Greedo. It could well be a genuine factory error, but more likely it’s a custom piece by a clever fan who saw the opportunity to make a cooler and more accurate Greedo action figure.

Whatever the truth may be, this is a unique piece that was worth mentioning. We don’t encourage breaking up original figures to make custom ones, but if you do have a worn-out Walrus man and Greedo figure, this could be something to think about. Fortunately, Greedo and Walrus man (in their standard variants) are not too rare, so it won’t be a complete crime if you choose to combine a pair into one.