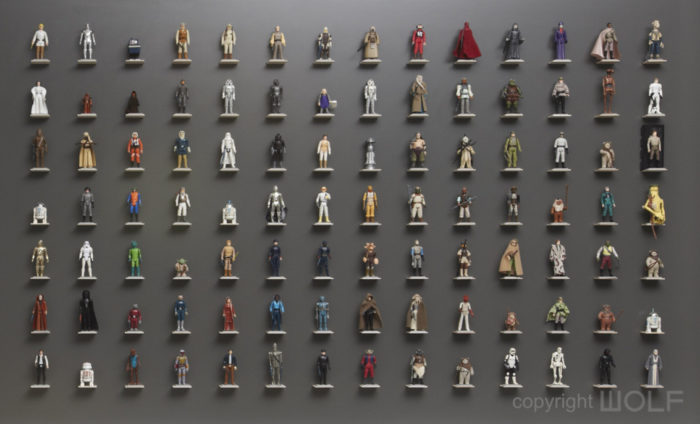 My collection of Star Wars figures has a focus on mint loose and complete specimens. In the collector’s vocabulary “Loose” references something out of its original packaging. “Complete” means that the figure has all its original accessories. “Mint” describes the condition as being never played with and as if freshly removed from package. I started this collection in the mid-1990s and it has continued till present day. This passion however, stems from 1977 when like so many millions, I fell in love with Star Wars.

Growing up in Thailand, I was unaware that Star Wars toys actually existed until a few years after the release of the first movie. Thailand never sold Star Wars toys during the original trilogy so I was only able to acquire them through overseas travel. At that time, they were just toys to be played with and I enjoyed countless hours in a galaxy far far away. The first thing to vanish were the small weapons that the figures could never hold properly. Most disappeared under furniture and then probably consumed later by our vacuum cleaner. Next went any capes or belts which seemed to restrict the choreography of my imaginative battles. Then came my little brother who saw no mercy and left many with dismembered limbs. My collection of fifty strong was reduced to miserable dirty dozen and were about as incomplete and battle damaged as you could get. Fortunately, I was then a teenager and too cool to concern myself with toys. Star Wars was old news, and by the late 80’s the franchise was rather dead.

Fast forward to 1994 when I stumbled into a collector’s store. An almost complete line up of Star Wars figures, considered “Vintage” were on display and for sale individually. Since 1991 prices had steadily increased and what once struggled to sell at garage sales were suddenly prized collectibles. It was an incredible phenomenon for me as  they were still just old pieces of plastic. My mind opened to a new world and so began my collection of Vintage Star Wars toys. With the announcements of a new prequel trilogy prices began to escalate and like so many collectors at that time we had to move fast.

I collected a variety of different Star Wars memorabilia, but with limited finances I narrowed my focus to the 3.45-inch action figure toy line. Within this group are ships, vehicles, play-sets and creatures that made it a rather large world in itself. I owned almost everything either mint in box or mint loose (without box). My true love however, were still the actual figures themselves and I preferred them loose rather than in package. There is something more nostalgic and tangible with being able to physical touch the figures and articulate them.

The total number of different vintage figures remains a debatable topic. If you just consider the different characters there are approximately 100 including Jabba the Hutt and his musicians. However, there are many variations to those figures with some of them looking quite different or historically significant. These are often referred to as major variants and include such figures as the Blue Snaggletooth, Vinyl caped Jawa and small/big head Han Solo. Then there are more minor variations that mostly concern differing paints. This could be a brown hair versus blond hair Luke or Lando with painted or non painted teeth. When you consider both major and minor variations there are approximately 120 figures in total. This group of 120 figures are considered by most collectors to be the standard or basic “Complete Collection”.

For the fanatical or real enthusiast there are many more minor variations that can be as subtle as differing manufacturers stamps, usually located on the rear of a figures leg (known as COO – Country Of Origin). Differences can also be found in figures released by foreign brands such as Lili Ledy, Glasslite and Meccano. These figures can have significant paint differences that make them particularly unique. When all of them are considered the total number of different figures can be in the hundreds, possibly up to a thousand.  Collecting variations can be addictive and takes effort to navigate through all the misinformation and reproduction items.  Owning one of everything is an eye watering, time, energy and money consuming exercise. I have no doubt that such collections exist and hats off to those collectors.

For the real addict these subtle differences in print on the legs are important and can lead to hundreds of variations.

Further to the aforementioned variations are factory errors that can be quite unique. While rare, they are not normally considered as collectible or valuable. The Wolf Collection stands at just over 300 Loose figures, all of which are in mint condition and complete with correct original accessories. Further to the standard 120, is a mixture of minor variations, foreign releases, and even some factory errors.

The information in this article is intended for informational or educational purposes to provide readers an understanding of how something may be seen from a certain perspective. Therefore this article should only be considered as an independent opinion. Information further to being of an opinion is provided to the best of our knowledge based on our own research at the time of this article. We cannot be held responsible for any inaccuracies or inconsistencies and reserve the right to change or update any content as appropriate.
The final responsibility of any products resides with the original manufacturer.