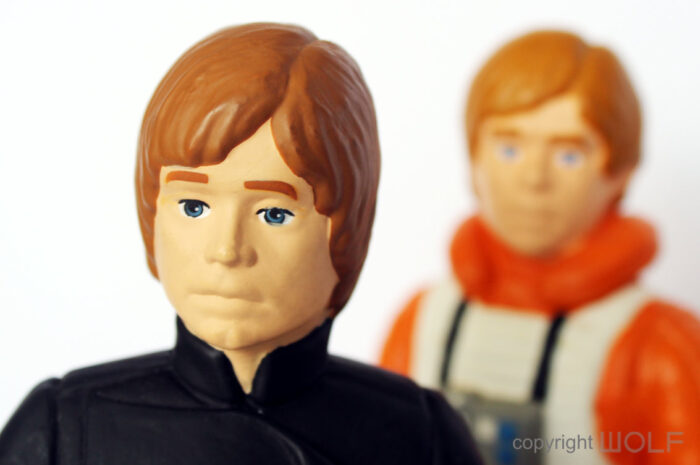 They may be Out of Character, but they are still Star Wars.

An Out of Character group shot

A retro review looks at products that are at least over ten years old from a present-day WOLF design perspective.

Out of Character in the Star Wars Universe.

The Star Wars Out of Character figures (1993-94) are in our opinion very underrated and undervalued collectibles of the Star Wars Universe. It’s hard to imagine that there ever was a time when Star Wars was out of mind and out of sight. However, towards the end of the 1980s, many toy stores still carried surplus Star Wars merchandise and struggled even to give them away for free. Many worth thousands today were shockingly tossed in the bin. By 1993 the Franchise was possibly at it’s absolute quietest, and not the best time to launch a new Star Wars line.

The full line up consists of ten main characters. Most are from Episode IV (A New Hope), with C-3PO sporting a silver leg from Episode V, and Luke in Jedi outfit from Episode VI. Luke was the only lucky person to be made in two figures.  These figurines are non-articulate and on average stand around 25cm tall, so they are not exactly small.  Often confused with the Applause figures that came out in 1995, these are the very first Star Wars figurines of this scale, so you could almost describe them as the original or vintage, though significantly less known. Each figure had an oval shaped tag when new and on the underside are two small golden labels, one under each foot. To our knowledge these figures did not come in any form of box or blister. When new they came inside simple clear plastic bags.

Golden tags and labels under foot.

Always two labels were there, even when there as just one surface as in these figures.

Not much is known about these toys as there is virtually nothing out there in print or online. In fact, this article could be the first and only consideration out there for these lost and forgotten Characters. These figures were released exactly ten years after Return of the Jedi in 1993 when the Star Wars franchise was near dead. No one was interested to buy anything Star Wars related, let alone a bunch of stiff figures that were not really suitable as toys for kids. Made in China they were not particularly classy or quality enough as display ornaments. As such the product line never went beyond the eight figures in 1993 and final two in 1994.

Molded in a hard plastic each figure is hand painted in a combination of matt and glossy finishes. The sculpt is quite detailed and accurate for 1993, but it’s far from crisp and some figures such as Luke X-wing Pilot and the Storm trooper don’t always stand on their own two feet. The figures are hollow and therefore feel quite light, however they still feel relatively substantial. They don’t appear as cheap toys, and with a retail price of $13 when new they were not meant as junk. The paint style is simple, but well applied, accurate and is unique. The sculpted poses are all relatively conservative but the faces have good likeliness to their real-life counterparts. Chewbacca may be the only exception with a relatively dorky looking face and posed peculiarly with crossed arms.

Luke got lucky and came in two outfits

As a hand painted product, no two pieces are ever the same so expect some variation from one piece to the next. C-3PO is painted in dull Gold, and we’ve seen many discolor to an unsightly green. While we would describe the plastic to be of good quality, we have observed cracks in figures that have not been properly cared for or exposed to UV sunlight.

Here we can see C-3PO’s gold starting to turn green.

Chewbacca’s face is not as real as the others

Darth Vader with his hands on his belt is probably the most disappointing of the range in our view. He’s far too short and could have been sculpted in a far more interesting pose.

Aren’t you a little short to be a Sith lord?

Although relatively rare, they are still not popular and you can find most figures available regularly on eBay. While almost 30 years old at the time of this article, many have survived in excellent condition with original tags and labels under their feet. Occasionally you will even see mint old stock pieces in original plastic bags. The average price is between US$15- $20 per figure. Ben Kenobi and the Stormtrooper are the rare ones in the lineup because they were the last to be released in 1994. Most people are unaware of their scarcity so they can be snapped up for a bargain.

Had these figures come out a few years later, or if only George Lucas announced his plans for new Star Wars films just a few years prior, the Out of Character line might have sold out of this World. Unfortunately, they remain from the forgotten era of Star Wars and most are bundled or confused with the more popular Applause figures from 1995+. Still, there are only ten figures to collect so if you want a complete and affordable line up, this would be an easy one to go for. They have a unique and curious beauty which deserves to be recognized. Hand painted toys are uncommon today so who knows, they may soon start to appreciate. We love them and suggest that these are the best things that came from a small selection of Star Wars Merchandise available at the dawn of the 90s.