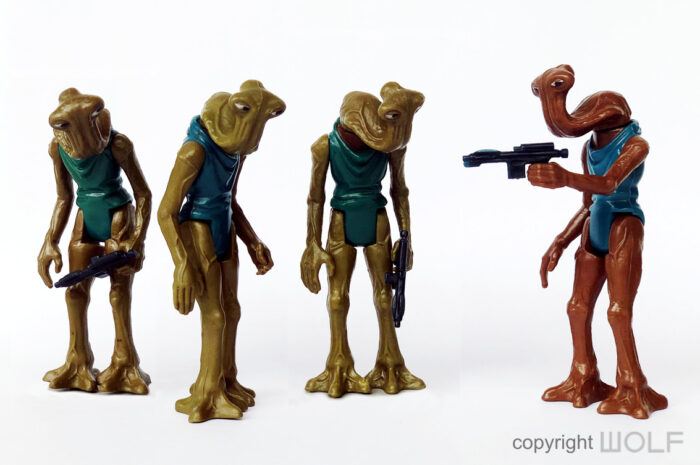 You’re all infected, stay away please!

Discoloured or faded figures are those that have lost their original colouring. Sometimes they make for unique memorabilia.

Hammerhead is well known to turn green and is often referred to as “Green Hammerhead”.

Discolouration may be a result of excessive use, or natural aging, but in most cases, it’s caused by exposure to UV light. A figure that is left for years exposed to the natural elements (sunlight in particular), is likely to suffer.

Not all vintage Star Wars figures are made of the same plastics so certain figures are more vulnerable than others. Furthermore, most figures have differing plastic types from their limbs to their torsos, therefore it’s quite common for a figure to have uneven discoloration.

Max Reebo is already strange enough as an elephant like alien wearing just a diaper, but he’s even more weird without his blue colouring.

As original Star Wars figures are now mostly over 40 years of age, many figures will now have some signs of aging. Unless perfectly preserved , discoloration can even occur in figures still sealed in original packaging.

In the past discolouration was considered rather unsightly, and many figures might have even found themselves in the bin. With all Vintage Star Wars toys being highly collectible it’s rare today to see even a broken toy discarded.  With variations now highly sought after, attention has turned to figures with unique colouring, even when caused through the aging process. Discoloured figures are for some collectors unique and interesting acquisitions.

Logray is an Ewok known to have several different shades in his stripes. Discoloured figures have been known to have purplish strips on a more yellowed body.

Not enough sun screen on these Ewoks

While this phenomenon generally reduces the value of figures it can make for a unique and interesting look.

Value may also vary from figure to figure. A rare figure is probably devalued through discoloration whereas a more common figure could be considered curious and unique. Dengar with his purple paint can turn grey or green, and good examples have been known to fetch higher prices than non-discoloured figures. The green limbed Chewbacca and Hammerheads are also known to be worth more than their non-faded cousins.

It’s a relatively small and controversial market which makes the sale of such figures rather hit and miss. In most cases a discoloured figure is worth less, especially if the figure is well worn from years of play.

Dengar should have grey armor but he was made with a purple coloured armor as a toy. Aged and discoloured figures however can actually look more accurate to the character with various shades and combinations of grey or green limbs and torsos.

21B medical droids tends to have rather dark and slightly greenish limbs when they discolour.

With figures aging in large numbers and in a similar ways, it’s easy to see them as official variations. A discoloured figure may be unique, but it is important to recognise the difference between a factory variation and a variation due to natural aging. A factory variation is official and anything else is really just an oddity, though sometimes a curious and attractive one.

“Brother, those are some old looking pants you’ve got on?”

Storm troopers suffer yellowing of the Torso and their limbs often turn pink. This trio are unique in being extremely yellow with limbs that are still relatively white. Interestingly we experimented with these three by exposing them further to the sun for period of several weeks, and to our amazement they reverted to being significantly whiter. It’s therefore possible that yellowing is not a  direct result of UV exposure.

The Rebel Commander has been known to discolour in a variety of ways. Starting from the left:

Luke in Hoth gear tends to get a lighter head scarf and boots when exposed to UV light.