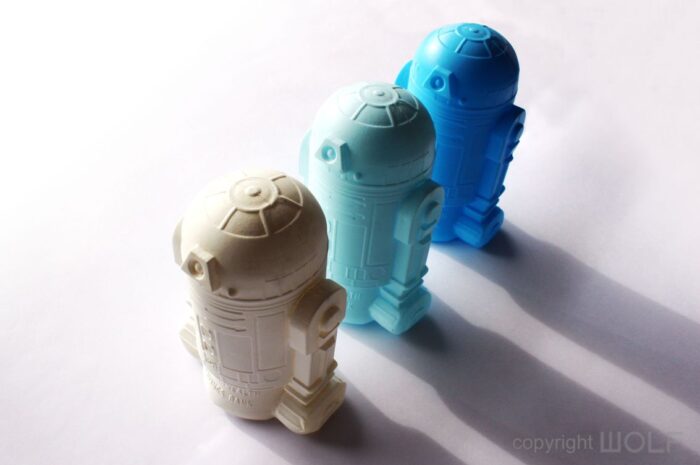 A unique venture between Lucasfilm and an Australian Bank

Back in the olden days it was quite common for banks in Australia to give out free money banks, especially to kids in order to encourage coin saving. With the popularity of the Star Wars films the Commonwealth Bank of Australia were able to get a license to produce plastic R2D2 coin boxes available from 1977 to 1980. A black Darth Vader head was available from 1981 but we like the R2 coin banks more and are thus the focus of this review.

How cool are these?

To the best of our knowledge these coin boxes only came in three different colours but not at the same time. First came the blue ones and are dated 1977 on the underside. The white ones are dated 1980 which we think must have coincided with the release of The Empire Strikes Back. In between is a light aqua one that is also dated 1977. We can’t be sure if it was meant to be this colour or if they were test runs in transitioning from blue to white. What we do know is that the aqua coloured ones are significantly rarer.

The R2D2 coin banks stand at approximately 5 inches tall and are well-proportioned to the real droid. The detail is surprisingly crisp and accurate for such a simple giveaway coin bank. The underside has a large bulging area that seems intended to add stability but also increases the available space for coins. It also makes a great space to pronounce the words “COMMONWELATH SAVINGS BANK”. The baby blue ones are bright, pretty and probably more interesting than the white ones in our opinion. The aqua ones are unique but do look like the result of ones that should have been white but mixed left over blue on the dye in the molds.

Each R2 unit is made from a soft plastic with a texture that looks like rough paper. It’s a tactile and light object that feels nice to hold. They can dint easily but the articulation in the sculpt keeps the object quite rigid. On the rear of R2’s dome is a generous coin slot. There is no openable lid or hatch so the plastic has to be cut in order to remove the loot. Fortunately, the cuts are usually on the underside so most banks remain presentable.

In a galaxy not so far and not so long ago you could pick them up at garage sales and shops for a just a few dollars. In recent times they are worth between $30 and $40 each. Expect to pay more for ones in mint condition without any cuts. The aqua coloured ones are hard to come by so could be worth as much as $100.

These are collectable for the fact that they are unique to Australia, and there was not a lot of Star Wars items exclusive to Australia back in the day. However, even just as a display piece they are rather cool and look particularly nice as a set of three. Keep an eye our for the light aqua coloured one, as he’s very rare.