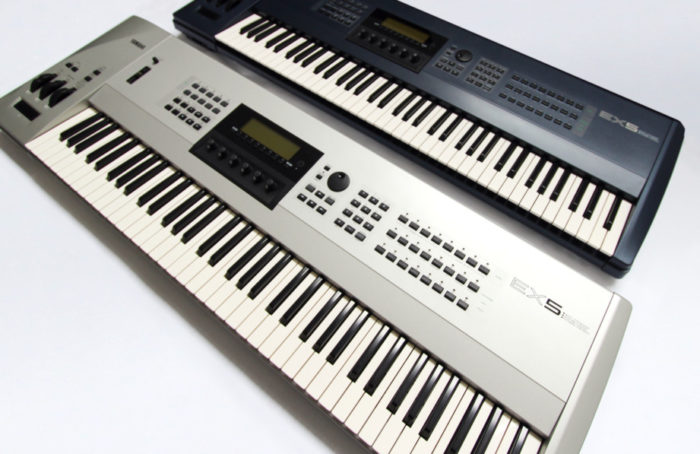 A retro comparison will normally involve products that are over 10 years old. While the technology and fashion of the period influence design, and are taken into consideration, great design ideas will transcend their eras to be timeless.

This comparison review is between the Silver and Blue EX5 synthesizers.

The EX5 was Yamaha’s flagship workstation/synthesizer that was first released in 1998 with a unique metallic blue paint. In 2000 it was then available as a limited-edition model in silver finish, in celebration of the new millennium.

Blue EX5’s are generally available on the second hand market and worth anywhere between $200 to $500 (Aust) depending on condition. They could be worth more in mint condition with original accessories but it’s probably not value for money to spend more that $500(Aust). The Silver one is quite hard with only 500 said to have sold. If you do find one, you should be prepared to pay double that of a blue one. Interestingly the Silver model was sold alongside the blue ones in 2000 and cost the same.

At the time the silver was quite novel and a fresh departure from the more common blacks and greys that dominated the 80s and 90s. Today however you might mistake the silver one as being the standard model and the blue on as a special edition since Yamaha has not made another blue synthesizer since.

Both the silver and blue models have a slight metallic paint finish. The silver tends to look almost white until you look closely. Apart from the colour both models are identical in every way except for the Logo graphics on the rear panel.

While near identical the silver does feel more like a performer to be used on stage, while the blue colour feels cosier, and comfortable in a home studio setting. Perhaps that’s because the Silver model bears close resemblance to the CS6X (1999) which had a similar colour and well known for dance music production.

Different Logo size and placement on the rear panel

Both models had the exact same set of manuals in 2 different languages. We think Yamaha could have made more differentiation with the limited-edition model in the same way that the rare DX7 Centennial has a unique look instruction manual.

The EX5 also came with a set of adhesive labels that you could stick on the top rear end to assist in locating the rear inputs. Naturally the silver model has silver coloured labels and the blue one has blue coloured labels.

From our research the he EX5S does not appear to have a specific brochure on to its own. Instead it was featured in Yamaha’s general products catalogue. This Japanese catalogue from 2000 shows the silver model alongside the blue one and selling for exactly the same price.

Both the silver and blue models are attractive in their own ways. We think that in time the blue one will look more retro and classic. It already stands out from the crowd for its blue colour. The silver one however will always have rarity and there is always a demand for special editions. If you can’t decide and have deeper pockets, we would recommend having one of each, that’s what we did 😊.

The information in this review is intended for informational or educational purposes by providing readers an understanding of how something may be seen from a certain design perspective. In this case it is from the view point of WOLF DESIGNS. As design is subjective this review should only be considered as an independent opinion. Information further to being of an opinion is provided to the best of our knowledge based on our own research at the time of doing the review. We cannot be held responsible for any inaccuracies or inconsistencies and reserve the right to change or update any content as appropriate.

The final responsibility of the design resides with the original manufacturer.